Adnams Get Arty: Two Beers From The Jack Brand Brewery

Adnams have joined the growing band of major British breweries to go all Artisanal.
But the thing is, because Adnams (at least apear) to put a lot of thought into their business practice – low carbon footprint, supporting environmental groups – I don’t seem to mind so much.
Jack Brand is their new range of limited edition beers and cynical marketing it may be, but at least the brewery is actually making beer specifically for the range instead of simply rebranding their existing products with the C word.
From a design point of view I like the way the bottles look.
They certainly have all the right signifiers, single colour labels, hand made in their feel, and with well written notes about the the beers’ origins.
And what’s more, the beer’s pretty good too. 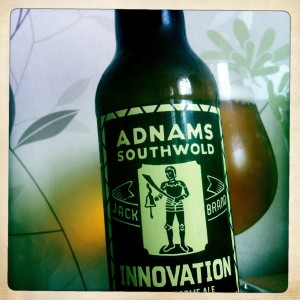 Innovation (6.7%)
Someone told me on Untappd that Innovation originally came under the Adnams name.
It still is really, as Adnams is emblazoned across the top of the bottle.
There’s certainly no pretending that Jack Brand is some cool, indie microbrewery.
Innovation is a big fat IPA with a peach juice and chewy sweet soaked in apple brandy smell.
The malt is an enormous toffee apple coated in sherbet and all spice that sits on your tongue and pushes hops down your throat.
The hops in question are zesty, fizzy mandarin skins, lemon pips, kiwi fruit and grapefruit juice and nestling in passion flowers and grass clippings.
The finish is bitter and dry and crisp, and guaranteed to make you want more.
Innovation is a really good beer. 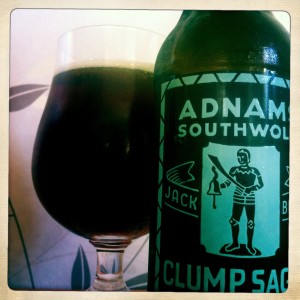 Clump Sagin (5%)
Named after an old moustachioed Adnams employee, Clump Sagin is a Rye IPA.
I have a bit of a thing for Rye IPAs, and this one doesn’t disappoint.
It pours a ruby red with a small neat head, and it smells of treacle toffee and toasted bran flakes.
The malt is dark and meaty with lots of warm honey, burned molasses and a hint of sour dough.
All this meaty richness is cut through by the hops that are sharp and bitter with a resinous backbone that’s sticky with woody pine that leads to a finish that’s all crunchy autumn leaf littler, chestnuts and bitter lemon rind.
Very nice indeed.