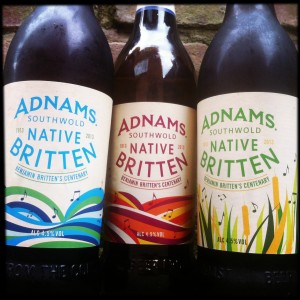 Native Britten has been brewed to celebrate the Centenary of Benjamin Britten, who happens to be a composer who’s music holds a lot of meaning for me.
My father was a singing teacher, choir master, and adjudicator of music festivals and as such my childhood, in fact my life until I left home in my late teens, was filled with classical music.
It was always on in the background, either records being played or singers being taught in our dining room.
Why Britten holds particularly poignant meaning is that he was the most modern composer my dad listened to, and one of the earliest (at the time anyway) that I listened to by choice.
And in fact my dad really only liked Britten’s work with Peter Pears and found pieces such as Peter Grimes a bit too modern.
As a result dad and I would argue quite a bit about music, with him telling me that Stockhausen, Glass, Cage et al, were rubbish, and me telling him that anything prior to Stravinsky’s Rite Of Spring was old and boring.
These arguments continued for years and often saw us not speaking for weeks at a time, though fortunately we did make up and become very good friends before his death.
And so slightly weirdly, drinking this beer by Adnams has got me reflecting on all this again, and made me want to listen to a lot of music my dad loved while I drink. 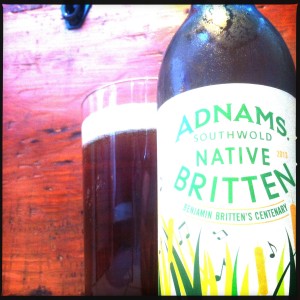 Native Britten is a Golden Wheat beer brewed with honey and thyme and it’s really very good indeed.
It pours a deep amber and smells of herbal toffee and bananas.
There’s banana in the flavour too, along with some vanilla, toffee, bread crusts and peppercorns.
The hops are orchard leaves and hedgerow greenery, but the star here is the thyme.
It’s right up front from the very beginning, giving a lovely woody, earthy, spiciness that tastes fresh and clean and works very well with the other flavours, lifting this beer from a run of the mill wheat to something a bit special.
The honey only sneaks up on you in the finish when, just as you’re enjoying a crisp lemon tartness, it comes on all rich and sticky and refuses to leave.
I like this beer very much, and my dad would have too. 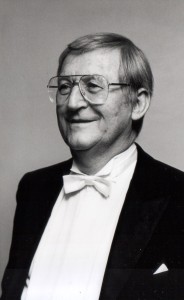