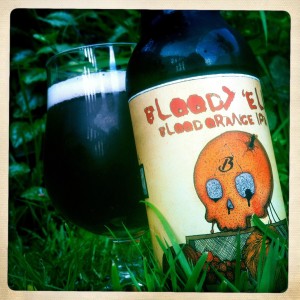 Bloody ‘ell is yet another beautifully dressed beer from Beavertown.
It’s a “Blood Orange IPA” and it’s really very good indeed.
No, that’s too polite.
It rocks.
It stinks like a crate of oranges wrapped in brown paper, fizzing with life as it sits a cloudy orange in my glass.
There’s a Telecaster’s worth of woody resin in here and some sticky toffee, black pepper and just a hint of chilli flakes.
But this is all about hops and oranges.
The hops are sharp and zesty mandarins and satsumas getting it on to a soundtrack of “Orange” by The Jon Spencer Blues Explosion.
And that’s because this beer is orange with a capital ORANGE.
It’s rock’n’roll.
Not hair and leather rock’n’roll, but dirty, groovy, sexy as all hell rock’n’roll.
And if you don’t love this beer in all its orangey brashness, then you my friend are NOT rock’n’roll.