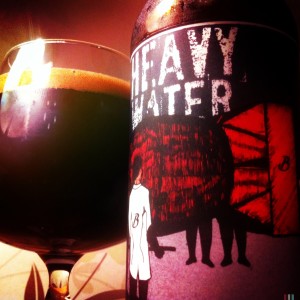 Hello.
I like you.
I like you a lot.
Heavy Water is an Imperial Stout that says all the right things to make you go weak at the knees.
It lounges in your glass the blackness of a collapsed star, a ring of sparkling cappuccino nebula swimming around it.
The smell is rum and charcoal and raisins and top soil, all of which is a very good thing.
I don’t really want to describe this beer in terms of hops and malts, instead I want to simply say that Heavy Water is that dark sexy stranger you see every Friday night in your local and lust after, but can do nothing more that say hello in a slightly cracked voice.
There’s bitter dark chocolate, rum, cherries, bracken, lemon rind, leaf mulch and pine resin, but none of that matters as you drink, because Heavy Water winks knowingly, leaving you wishing you were more attractive than you are.
Because then you might be brave enough to say more than hello.