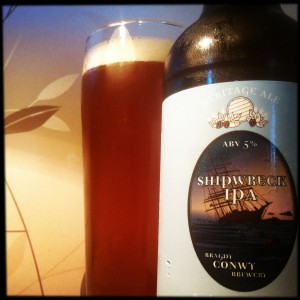 First I had Conwy’s Celebration Ale and it was poor.
Then I had their honey ale and it was equally bad.
Now I have their IPA and well, you guessed it.
There’s something really unappetising about this brewery’s beers.
The smell is dirty farmyard fruitiness, the malts are slightly biscuity and a little bit bitter sweet like burned sugar.
And the hops are fruity and sharp but nowhere near punchy enough.
The bottom line is that this just tastes like some beer, and that is probably the worst description of all as it means that it’s just kind of there without any distinguishing features.
Brewing isn’t about simply putting some malt and hops in water, even I know that, but that’s what Conwy’s beers taste like.