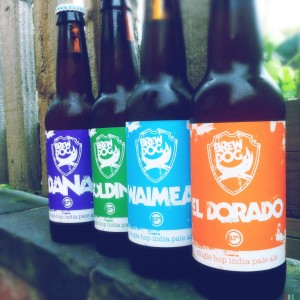 You know how it works, just the same as last year.
Four bottles of beer with the same malt profile and ABV of 6.7%.
All brewed with a different hop variety, and then packaged in a very eye catching way but with BrewDog’s usual silly name and a load of waffle down the side of each label.
As much as I admire BrewDog’s beers (apart from the now almost unspeakably dodgy Punk IPA), I am sick and tired of their marketing ploy of forced edginess.
It’s like the final days of The Sex Pistols – when they stooped to getting Ronnie Biggs to sing on 7″s – on endless repeat.
People are already paying attention!
They’re buying your shares in their hoards!
They’re visiting your bars in their droves!
They’re drinking your beer up and down the land!
Time to stop screaming for attention and just get on with it.
In the meantime keep an eye on your beer, look: 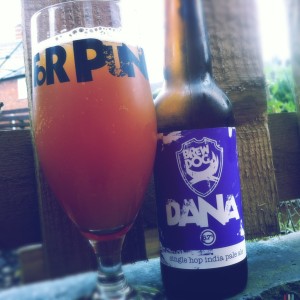 Dana
Dana is grown in Slovenia and is a cultivar bred  from German Hallertau Magnum and Slovenian genetic hop material (which sounds slightly like GM to me).
The beer pours a cloudy dull orange with only a few bubbles for a head.
The smell is fresh and juicy, but with a gnarly old weathered 2×4 in the background.
The malting used across the four beers is based on BrewDog’s Hardcore and you can really tell, with a robust caramel and burned sugar base with a hint of biscuit.
Dana, at least in this context, is resinous and woody, fizzy with sherbet, and lots of spiced apricots and grapefruit skins that leave a long dry and superbly bitter finish. 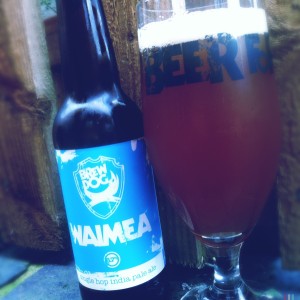 Waimea
So, I’m on the second beer in this four pack and I fear I may have stumbled on a bit fo a problem.
The malting that I mentioned above is here and it’s nice, but in this brew it’s completely overwhelming the hops.
So now I’m concerned that the other two bottles will taste the same.
It’s either that or Waimea – A relatively new New Zealand hop variety – has almost exactly the same properties as Dana.
In fact the only real difference I can discern is that there’s a slightly less bitter finish.
Not good. 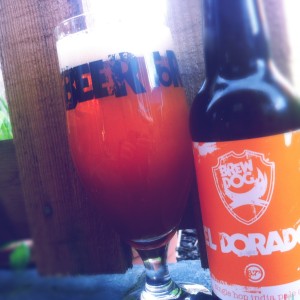 El Dorado
This is certainly better than Waimea, and the malt doesn’t intrude as I feared it might.
There’s a good sherbet fizz and a smell that’s fruity and fresh.
In fact the malt seems hidden away this time, just lurking around in the background allowing the hops – this one is grown in Washington State – to give you their soft orange, mandarin, peach and green grape sharpness.
That said, there’s not a great deal of strength to them, and certainly not the big kick you might expect from a beer that’s meant to be highlighting the hops.
Unless of course El Dorado is a fuzzy little soft thing. 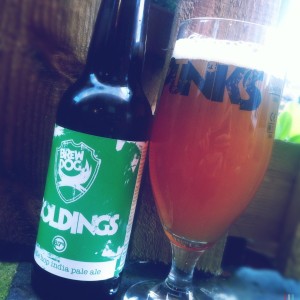 Goldings
East Kent Goldings I’m told and the last of my four pack.
This is probably the best.
There’s a decent orchard flower pithiness, some hedgerow greenery, stinging nettle sharpness and a little twist of lemon on the side.
All that over a malt that began as enjoyable with the first bottle and has become a bit of a chore by bottle number four.
Goldings – The best of an underwhelming bunch.
Who’d have guessed that?