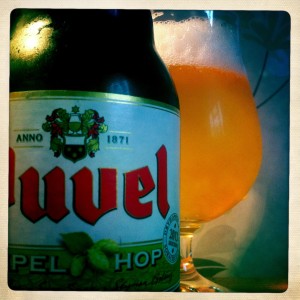 Last year Duvel brewed their Tripel Hop with Citra and I didn’t like it much.
This year it’s Saaz, Syrian Goldings and a massive amount of dry hopped Sorachi Ace.
And you know something?
This is a whole lot better.
Tripel Hop pours a watery yellow with a thin head and doesn’t look much in the glass.
The smell is straw, yeast and just a touch of urinal.
Not a great start, but everything starts to happen when you drink.
The malt is a light crisp baguette and honey that simply sags under the weight of the hops.
And so to the hops.
They’re sharp nettle stings, lemons the size of your head squeezed directly into your tear ducts, gentle soothed by green leafy herbs, satsuma skins, kiwi fruit and te most extraordinarily long and bitter face crumblingly dry sherbet flecked, battery acid dipped lime leaves that don’t ever go away.
And all of that is super except the lack of a strong malt leaves te beer feeling razorblade thin.
Tripel Hop 2013 would be head puckeringly good if the malting wasn’t so limp.