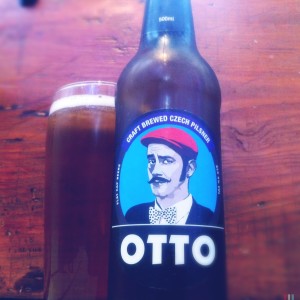 Otto is Flat Cap’s Pilsner and brewed in the Czech Republic it may be, but it’s just not as good as I wanted it to be.
Perhaps I wanted too much.
It’s a light straw coloured beer with a feint smell of fruit and flowers, the malt is popcorn and caramel, nice enough but with nowhere near enough presence.
And it’s the same with the hops, they’re herbal and floral, there’s lemon rind and some spiciness, but it’s all a bit blurry, a bit indistinct.
What I was hoping for was something big and punchy that stood head and shoulders above the Czech Pilsners I can buy on the high street, but sadly this doesn’t and so next time I want “craft brewed” Pilsner I’d rather buy something like the beers made by Freedom in Staffordshire than a slightly generic beer like this one.
I’m sorry, but that’s just the way it is.