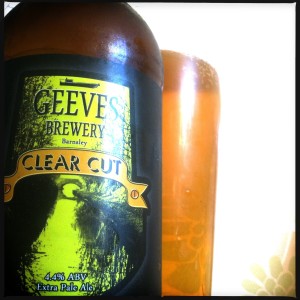 I really like Geeves Brewery.
They don’t bother themselves with ground breaking brewing and off the wall recipes, instead they concentrate on making effortlessly drinkable beer.
Clear Cut is an Extra Pale Ale and it’s a lovely clean, crisp drink.
It pours a light straw and smells of fresh lemons, peaches and honey.
There’s a good light caramel and shortbread malt, but it’s the hops in Clear Cut that are the stars of the show.
Right at the front there’s freshly mown lawns, dandelion leaves and bramble jelly.
And across this cuts stingingly sharp lemon rind and grapefruit flesh which builds towards a finish that’s long, bitter and immensely more-ish.
I’ve now had about half a dozen Geeves beers and have liked them all.