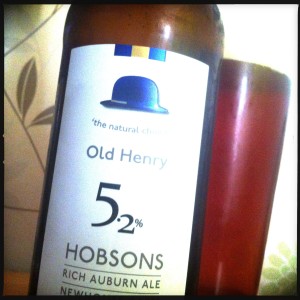 Old Henry is a “Rich Auburn Ale” and I bought it as I was surprised to see it in my local Co-Op.
You see, Hobson’s is the House Beer in my favourite pub, The Wrekin Tap in Shropshire, so it’s a little surprising to find it so far from home, especially when packaged in a Father’s Day presentation box.
In Shrewsbury maybe, but a tiny village in South Leicestershire?
Anyhow, Old Henry is a nice copper colour and has a big toffee and biscuit smell.
And that’s pretty much how this beer pans out, with lots of treacle toffee, bran rich biscuit, and some cracked black peppercorns.
The hops have lots of crisp and bitter hedgerow and some red berries, and the finish is round and fruity, with a little bitter kick right at the end.
Old Henry is rather nice.