It’s Better Down the Pub. Really?

It’s better down the pub is the new mantra. And few would deny that there is little to beat the enjoyment of a few pints of something interesting down a friendly local with a bunch of your mates. But, what if your local isn’t actually all that friendly? And the nearest that it gets to interesting is that strangely configured Greene King IPA pump offering bland brown liquid to get you through the evening? 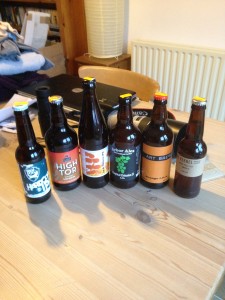 That is the place that I find myself in these days. So a thought came to me. Not a very original thought, I will grant you, but a thought that I hadn’t really had before. A thought along the lines of, “actually it may be better at home sometimes.” Not very supporting of the licenced trade, maybe, but an idea that I was willing to run with.

There will be five of us. Not a bad number. It should give us a reasonable budget. How much per head though? Night out down the pub and you won’t see much change from £30 will you? The question is asked of the boys. The answer is £15. Not that they are tight you understand. So £75.

Now, I could pop to a local supermarket and buy seventy-five bottles of Banks’ Bitter for that, but it is not really going to make for much of an evening. Better to head to my favourite bottle shop and stock up on something decent.

Most of those who read this will know of or even frequent @cotteridgewines and whilst it is more than sixty miles from home it remains my best bet when I want a decent selection from several countries at a decent price. Or something special at an eye watering price if it comes to it.

And part of the enjoyment is in the selection. I have been told to err on the light side. No strength restrictions though. Not exactly limiting, although I can’t resist chucking in a few dark ones to add to the fun. We end up with twenty-eight bottles. The cheapest £2.50. The priciest is £18 but is a mini keg to act as pallet cleanser and baseline which seems a sensible idea. Even if it is 5%

I have a personal preference for beer on the cool side, so on the day (a Thursday evening if it matters) the house beer fridge is cleared and restocked with the evening’s offerings. Nibbles are bought, we can’t have beer without nibbles, and a curry prepared. The boys, beer and curry. What more do you need? OK, there is that, but we are all married and most of us over fifty so this will do. 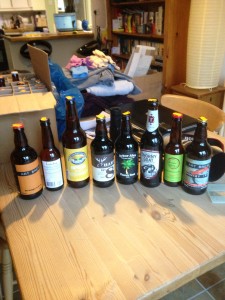 Things start badly. First arrival is an unfashionable fifteen minutes early. Can we start on the tasting beers? Probably not. I have a Shepherd Neame India Pale Ale to hand. At 6.1% it is not your obvious starting point, but we will share it. I wasn’t convinced by this when I first tried it, but the flurry of positive comments on Untappd has led me to try it again and I am liking it more and more and it is readily available, which is a benefit.

Twenty minutes later and we are quorate. The mini keg beckons. Why are these things so difficult to get into? And the instructions so unfathomable? After five minutes of wrestling nothing has been broken and the first high pressure dribble is dispensed. It is Hopping Mad Liberty. An American Pale Ale. Not sure if it is a special as it doesn’t appear on the brewery website, but all agree that it hits the spot. It pours clear and golden with a lingering creamy head. Tastes as you would hope given the tasting notes. We only have nine pints so it is a good job that I have decided to offer it in halves. Couldn’t (wouldn’t) do that down the pub.

Our final arrival is an unfashionable hour late. Traffic has delayed him on the fifteen mile drive over (beds are on offer so no DUI worries). Conversation flows. We have big bottles and little bottles. Idea is that we all drink the same thing at the same time. Not that we are going as far as tasting notes, though I do keep track of what we are having. As ever, the early pace is brisk. Stocks are dwindling. Are we going to need to end the evening at the pub. It certainly is better down the pub when you are out of beer at home! 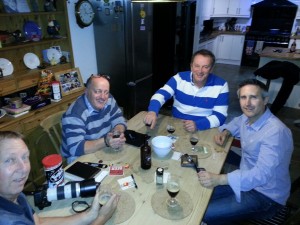 The curry is had. And well received. And time has suddenly marched on. Midnight so soon? A final push and some of the dark beers make their presence felt in the early hours. An Arbor Ales Phoenix Stout Freestyle Fridays #25 earns plaudits for its ability to bring dates to the genre and we line up for the finale. Thankfully Kernel are up to the mark with a Centennial IPA that is widely admired.

And we are done. At just past one am. Nobody is looking for more. We are not over refreshed, but there is a sense of a good evening spent with mates over some very satisfying beer. Time gentlemen please!

Beer of the night? Brouwerij Due Molten Lent Hop was not an obvious front runner, but it won by a short head.

Worst beer? Yes, there was one stinker. Although it had a great nose, it was really not supposed to be a Lambic. The brewery spotted the post on Untappd and has offered a replacement. Very nice of them.

I think we can say that we had a good time. Not the same as the pub, I had the clearing up to do for one thing, but I reckon we will do it all again. At someone else’s house next time. And having got this to the best part of 1000 words, I am off to meet my wife. At the pub.

9 Responses to It’s Better Down the Pub. Really?