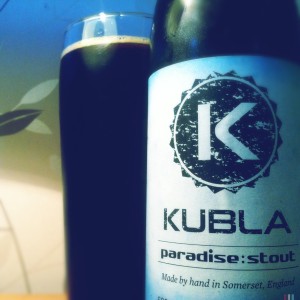 As much as I like the guys at Kubla, and as much as I enjoyed their Saison and Pale Ales, this is rather disappointing.
It poured almost flat, with a slight head that almost immediately collapsed.
The smell is a soft liquorice and chocolate, which is nice enough, and the malts have a decent chocolate biscuit centre and some red fruit richness.
There’s Star Anise too, and just a hint of spicy heat.
The hops give a pleasant lemony sharpness, but the overall flatness makes thi beer anything but Paradise.
It feels watery and thin and a little insipid.
I’m hoping that I happened to get a bad bottle.