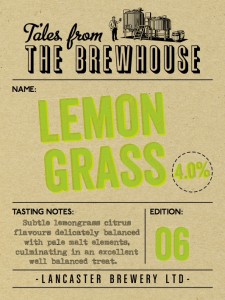 This beer’s pump clip caught my eye at one of my regular haunts during the beer festival they hosted last bank holiday weekend.

It’s a limited edition beer the Lancaster Brewery brews exclusively for the Tales Of The Brewhouse range for Mitchells & Butlers. The pub concerned, The Crooked Billet, is a Nicholson’s house, one of M & B’s “brands”. That sounds so romantic doesn’t it?

It’s a blonde beer (surprise surprise) brewed with Kiwi hops that does not pack such a citrus punch as it’s name may suggest. There is also a hint of black pepper which gets stuck at the back of the throat during each gulp. It’s was a fine beer for the idyllic setting by the sea during a warm evening but I am pretty sure that I wouldn’t rush out and buy a pint of it, or even try it, again. There are much better golden beers around.