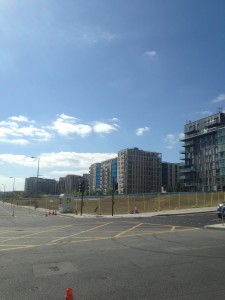 Westfield. Unless you have a penchant for Lotus 7 levels of speed and handling, most will associate the word with the Saturday Shopping Hell that is the modern super mall. So why have I offered my wife a trip to Westfield? And why, given that she enjoys shopping as much as the next man, has she accepted?

Turns out that we have unfinished business in the East End. Whilst we have taken advantage of the likes of Rake and Brewdog Shoreditch in recent months, there is more life out beyond Hackney Marshes that promises beery delights and not just jellied ells, mash and liquor.

As ever, it is a mid morning train into Euston, the cost of which continues to amaze for its affordability.  As ever, the aim is to walk as much as possible, although we are conscious of what we have taken on, though not conscious how, exactly, the day will pan out.

So it is back to the Regent’s Canal. Back to Hackney. Back to London Fields. Partly to revisit the Broadway Market that was one of the highlights of the London’s Brewing weekend. Partly, though, to give London Fields’ Brewery a go. We had popped in at the start of the LBW, but had not had a beer and the subsequent experience had seen us leave in high dudgeon. So it deserved a second chance. One problem. Five to twelve and the shutters are down. No opening hours are posted. Quick check of the website and it appears that they are due to reopen TODAY after a quick refurbishment. Hurrah! We catch site of a brewer having a quick smoke at the back of the brewery. He advises that the function space “should be open, but not the Tap”. 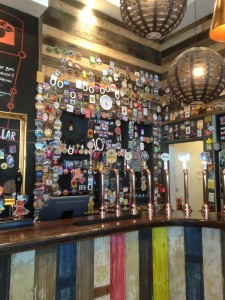 Round the corner we go. There are people with sticky tape and banners doing “stuff”. “Open?” We ask. The people look at each other and collectively decide that No, they are not actually open. Another London Fields fail and we will not try again. The Cock Tavern comes to our rescue again and does not disappoint. Both of us feel that keg works better than cask early on in a session. Cooler and fresher. Sadly the IPA is not on, but I snaffle an English Light Ale from the basement and a very enjoyable Five Points BC Red Rye No 2.

Studying the map, we have a choice. Straight to Westfield or off to Leyton? Brodie’s beers first came onto my radar at the Milton Keynes CAMRA beer festival last year. Their Saki IPA is, so far, my beer of the year. Their London Sour Pineapple was one of my first sours – I hated it but have moved on since so am more than willing to have another go.

Brodie’s Brewery Tap is the King William IV. A big old boozer this. Smelling of wet dog and unwashed bodies. Sort of place that leaves you feeling dirty. But what a selection. I don’t count. I should have. Craft Beer London says that they have up to 16 Brodie’s beers on. It could be more. And includes Saki which proves to be as good as remembered (phew).  The London Sour is very sour. It smells of Scampi Fries and re-affirms my growing interest in what is, in all honesty, beer that tastes of off flat cider. What have I become?

By now it is past lunchtime. A selection of samosas from an Indian Sweet Shop hit the spot and we head towards Westfield. Westfield Stratford City. In the shadow of the Olympic Stadium. Home to Tap East. (Come on, you knew that this was never going to be a shopping expedition!) It is a bit of a trek. So far, everywhere has seemed to be a three mile increment, but the weather is fine and we are making better progress than the folk stuck in the grid locked traffic. 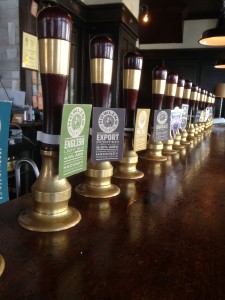 If the King William embodied the souls of all who had drunk in it over seventy or more years, tap East is the complete opposite. This is a unit in a mall. With high tables and low settees. Children milling about. Brightly lit. Three brewery beers on offer. A good selection from elsewhere and the fridges look interesting. Soulless though. Tonic Ale is very very dry. Anarchy BC’s Citra Star is, at £3 a half, barely adequate.

Now we face a choice. I do want to get to Islington as there is a beer being launched. But it seems that there is another brewery on offer. Crate is only half a mile away. And I have enjoyed Crate in bottles so it would be a shame to miss their Tap. Trouble is that nobody can tell us the best way to get there. “Take the Overground” we are advised. It is one stop. And traveling one stop in London is rarely cost effective. Only one thing stands between us and another of London’s recent crop of new brews. That thing is the Olympic village. Surrounded by high fencing it is something like a scene from a post nuclear landscape. Signs announce that it is an “Exclusion zone”. Quite a big one as it turns out. We see the stadium from pretty much every angle. 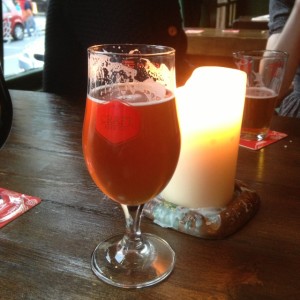 Crate is in an old fashioned industrial estate. And busy. But not that good.  I prefer their beer in bottles evidently.  Onwards then. Sensible folk would opt for the Overground at this stage. The walk around the Olympic Park had been soul destroying in all honesty. But we are back on the canal. Hertford Union this time. But still a long drag to Islington. Not giving up now though. Heads down. The canal towpath is a livelier place than it was at lunchtime. Ad hoc parties on canal barges looking very hip. Some very contrived parties trying to be achingly ad hoc and hip but failing. Lots of young men carrying boxes of beer. Hope that they enjoy their Stella and Budd 🙂 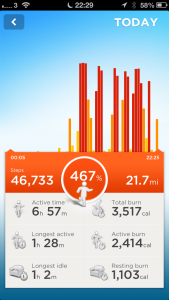 We make it to the Earl of Essex. Fathom out how to order. The Camden Ink Stout is another average beer from that particular source.  Craft Brew Co N1 then. The beer launch. Guessing that the VIPs have long gone as there is little to suggest a party atmosphere. Just a good pub vibe. The Big Inflatable Cowboy Hat is rather fruity. And over 10%,  but a good way to end the day, because it is pressing the twilight hour when the trains slip from four to two an hour. Yes, we have made it to almost nine o’clock. So Euston. Without a visit to the Tap!

Home before eleven. Twenty one miles if you are interested.