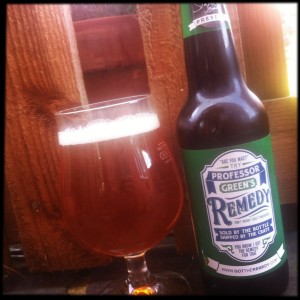 I like the premise of Signature Brew, after all my band made a beer with Revolutions Brewing back in 2011 so I’m not really in a position to knock what they’re doing.
And compared to the usual drinks available in concert venues this is in a whole different league, but it’s not as good as I want it to be.
I’ve now tried three Signature Brews and they’ve all been brewed at Titanic in Stoke On Trent, which is more an interesting aside than a meaningful bit of information, though I would like to know if Signature is a Titanic project or a cuckoo using their brewery or if Titanic are contract brewing.
Anyway, where was I?
Ah, yes.
Professor Green’s Remedy is a Pale Ale and it does what it does OK, but it’s nowhere near the, “beer that surprises people,” that it claims to be.
There’s a decent toffee malt and a bunch of biscuits, and there’s a lightly spiced, lemon rind brittle sharpness to the hops.
All this leads to a finish that is reasonably dry and crisp.
But it’s not exciting, not inspiring, it’s just kind of there.
Pleasant enough but easily forgotten.
With all that said, if a bunch of music lovers are turned on to trying new beer and get into our new breweries because they’ve bought some beer with their favourite band’s name on it, then I’m all for it.