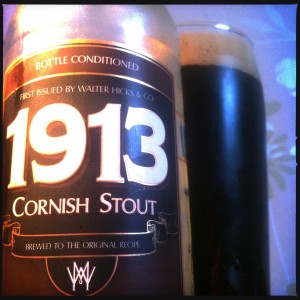 Brewed to an old recipe, I would be looking forward to this if it wasn’t presented to me in clear glass.
As you know, I won’t buy any beer by choice if it comes in a clear bottle, but this came as part of a mixed case.
And it has all the hallmarks of light struck badness.
Somewhere under the weight of damp sick-filled ashtrays form the night before there’s a half decent stout fighting for air.
What I really don’t understand is why St. Austell – A Brewery who I like very much – has brewed a beer to a traditional recipe and not presented it as such, ie. in a brown bottle.
My guess is the marketeers have said, “Ooh, that’ll look nice on the shelf if it’s clear,” and as a result they have spoiled what may have been a very nice beer.
I managed just about half before it went down the sink.