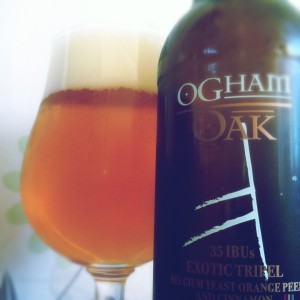 Part of Celt’s Ogham Series, Oak is an “Exotic Tripel” brewed with Belgian yeast, orange peel and cinnamon, and it’s terrific.
Oak is a golden beer with a fluffy cloud for a head and a lovely aroma of fresh yeasty goodness, honey and pear juice.
Taking a sip I’m immediately struck by the spiciness which I think is probably the cinnamon.
You see, you don’t really taste the cinnamon as such, it’s just kind of there, creating a warm earthy background that highlights the bitter zest snap of the orange peel.
The hops are snappy bramble leaves, blackberry tea and walnut woodiness, and all this leads into a superbly long bitter dry finish that hides the ABV beautifully as I reach for another sip.
The only fault I can find is purely due to my pedantry about the English language.
The label really ought to read “Belgian Yeast” and not “Belgium Yeast”.
But that’s just me.