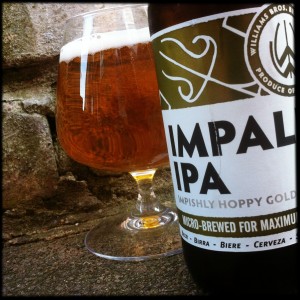 This probably won’t take very long.
Not in a bad way you understand, in fact this beer is really rather good.
And that’s the problem.
You see, I want to sit and drink this instead of writing about it.
Another in Williams Bros’ Chapeau Series of collaborations (that word again – I seem to be drinking a lot of collaborative beers recently) with up and coming brewers*, Impale IPA is super drinkable.
A yummy golden beer with a spicy apricot aroma, a malt that’s sweet and warm and has just enough biscuity crunch, and lots of peachy, lemony, zesty, zippy hops to sparkle on your tongue.
And then there’s a finish that’s bitter, dry and long.
I like this a lot.

*Impale IPA is brewed in collaboration with Ed Young, winner of the International Brewing and Distilling Competition at Heriot Watt University.