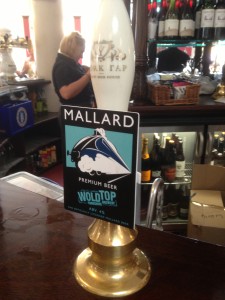 It is seventy-five years since Mallard was taken to the brink of destruction to deliver a world record for a steam engine that stands to this day. To celebrate, the National Railway Museum brought all six remaining engines of the class together in York. A task that required that two of the said six be brought back from the other side of the Atlantic and that I take the trip to York to see them.

Now a trip to York is never  really a chore ( so long as you ignore minor aspects like traffic and parking) so a plan was hatched. Turns out that the six would only be on display together for two weeks, starting on a Wednesday, great idea guys, give people two weekends to play with instead of three, then completely underestimate the level of interest and you can start to understand why we were greeted with queues snaking around the building when we turned up mid Saturday morning. 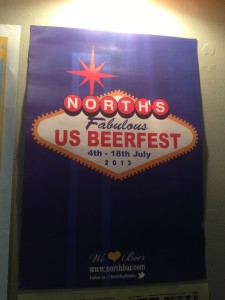 Clearly, I like trains. Call me sad, I don’t care. I have liked them since I was a boy and still do, although if I am honest, I do prefer the dulcet tones of a Napier engined Deltic to any steam engine. There, I said it, I can live with myself at last. But if I like trains, I hate queues. And this was a big queue with no indication of waiting time and a blazingly hot day to boot. What is a man to do?

There had been a degree of cunning in the planning of this jaunt. First off, we were not staying in York, but Sheffield. Secondly, we have left the car in the hotel car park and completed the journey by train. A journey that did not take any more account of it being York Races than the train company did in scheduling a four coach train on one of the busiest days of the year. Let’s just say that it was cosy. So we are in York. Have abandoned thoughts of elderly steam trains and are carless. Pub it is then.

Earlier in the week I sampled one of my missed @beerbods beers. From Rooster’s Brewery, it promised ground breaking hop forward ale with a focus on flavour and aroma. And with a name like Yankee I was expecting great things.  Turned out to be low on either flavour or aroma and whilst it was a perfectly drinkable bottle of wetness, it was a disappointment. So I marked it fairly aggressively on Untappd.  Which resulted in the brewer taking slight umbrage at the fact that I had slated his work. He seems like a nice bloke though, so I said that I would look out the cask version if ever I got the opportunity. We parted on reasonable terms. And now I am on his doorstep (not literally)  searching his website for a stockist near me. 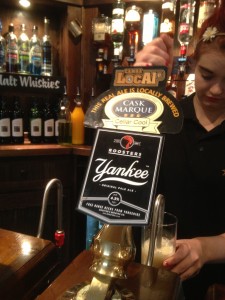 The Maltings is a pub that I have seen many times, but never entered. Looks a bit Gothic from the outside. The signs are good though as there is a bouncer on the door. It is barely lunchtime! Inside there is a heady mix of locals, racegoers and tourists (I hate being in the last category, but hey ho). The queue at the bar is slightly shorter than the queue for Mallard. But it is moving. No Yankee.  But Rooster’s Last Stand is on and is rather good. In train spotting mode, I update Untappd and get a near immediate answer from my new brewing mate who is pleased that I have enjoyed it. I still want to try Yankee though. The Blue Boar is just a short walk away. And a tad odd. It is a bit like a tea room. With a massed array of hand pulls. And Yankee. It is better fresh. I feel good  for having made the effort. Last Stand was better.

One of the joys of a train ticket is the option to break your return journey. I have a bit of a need to try Leeds. Last time I was there I was in full on CAMRA mode. Leeds and I have moved on.  So I nearly forget the York Tap. Which would have been a shame as it is a very nicely done bar with a good selection.  The Dark Star Partridge goes down very well. Wold Top Mallard, brewed in honour of the great locomotive, less so. Seems better in big gulps – which doesn’t quite work when you are drinking in halves.

The train to Leeds is somewhat emptier than the train to York was. There is an air of sadistic glee in the carriage as the obligatory moaning child falls off his seat and finally has something worth crying for.  We are aiming for North Bar. Somewhere that I have seen mentioned on Twitter, but never visited. I have read that it is a hipster’s hangout. I have also spotted a poster on their website for a US Beer Festival. Can this day get any worse? 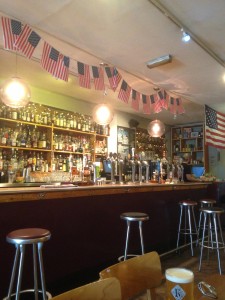 Expecting a pub, we walk right by. Check the web and turn back.  This is a bar in the continental mould. Basically a shop front with a long bar running down one side of the retail unit. The hipsters must all be chilling elsewhere, the clientele look like Joe Public to me. Lots of American flags in evidence though.  No idea what my first beer was. There was something of a distraction behind the bar. Sitting in one of those small fridges that you might buy in Currys. For use at at a barbeque. Probably got a Stella Artois logo on its plastic door.  A 75cl bottle. With a hand written label. Barely a label to be honest, there is bugger all information on it. “Passion Fruit Porter – Cigar City Brewery”. It is a thing of beauty. We are magnetically attracted to each other. I feel that I need this beer.

I do like a beer list. North Bar has one. Surprisingly thin to be honest. But it tells me that I will need to part with a reasonable chunk of cash to savour this beauty. What the Hell!  Not much of a story in drinking average beer is there? And this is not very average. To be honest,  I find the passion fruit to be very (make that VERY) subtle, but the after taste is like cocoa powder and it lasts and lasts until you take your next pull. Not sure how strong it was, they didn’t bother putting that on the bottle. Some beer.

You know that feeling when you look at your watch and what was two o’clock is suddenly five? We are there. And have arranged to meet relatives in Sheffield in a little over two hours. Time to head back to the station. But the  shop next door to North Bar catches my eye and I take the opportunity to pick up half a dozen local beers to savour back at home.  Thankfully the carrier bags are industrial strength and we all make it safely back to Sheffield to check in.

We are meeting the rellies in Hop Sheffield. A recently opened sister bar to Hop Leeds which I have visited in the past come to think of it. We have half an hour spare so go the long way round to take in the Sheffield Tap. Thirsty work all this travelling and we squeeze in a Magic Rock Juggler and a New York Pale Ale from Chantry. The former was excellent, the latter decent enough but a mystery as to why it bore the NY moniker. Maybe it is NY County Durham, I should check. 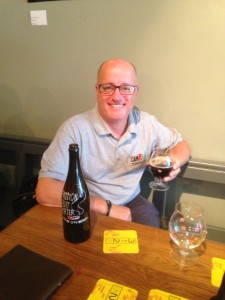 Hop is a pleasant bar. I introduce my cousin to Untappd, he seems to like the concept. CAMRGB next for him then! Burton Bridge Damson Porter (I do have a bit of a dark ale theme continuing into the night) and a Rat Brewery White Rat are my tipples before the band strikes up. This is a bar devoid of soft furnishings and we want to talk. The music is good but in a still half, maybe quarter, empty pub it is bouncing off the walls. We finish our drinks outside and head for the Devonshire Cat. Which is the emptiest I have ever seen it. Not empty empty, just empty for the Cat. Suits us. I have Crimson Steel from nearby Kelham Island and then we sample the bottle list. My choice is a Timmerman’s Gueuze Lambic, not a good choice according to those who tried it. I begged to differ.

And that was it. Last orders sensibly ignored. Back to the hotel via the chippy. Another disastrous weekend where pretty much nothing went to plan. Shame that.