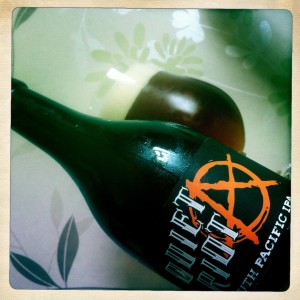 What odd shaped bottles.
Anarchy are based in Morpeth, a town in Northumberland that I know as its the home of Elsie & Jack, an experimental record label run by my friends the Rodriguez brothers.
They release odd sounding music.
Perhaps this oddness is linked with their location.
Anyhow, the beer.
Quiet Riot is a South Pacific IPA, so you can expect kiwi and melon, lime, passion fruit and tangerines.
And you get them all in abundance.
The beer’s quite a dark amber and the smell is “Attack Of The 70’s Sweetshop,” if that film ever existed.
And it should.
It’d have a soundtrack of modern experimental music from Morpeth.
There’s a nice round sticky toffee and honey malt served on brown bread, but the hops are the tart and bitter stars of this movie.
Loads of resinous wood, pine cones, pink grapefruit, walnuts, kiwi fruit, super tangy sherbet zestiness, oranges and foam sweeties.
The finish is extra dry, crisp, tongue witheringly sharp and bitter.
And above all good.
Very, very good.
Now where are my Birchville Cat Motel records?