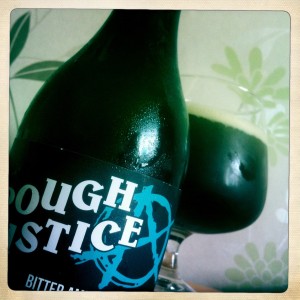 I like this very much and can only find one fault with it, but I’ll return to that later on.
Rough Justice is described as a “Bitter Amber Rye” and it’s certainly all three.
It pours a dark chestnut red and smells woody and fruity, like cherries and grapes on an old occasional table.
There’s a lovely dirty earthy rye kick when you take your first swig., it’s deep and dark and naughty tasting, and it works well with the toffee and plum jam at the heart of this beer.
The hops are resinous, piny, orange peel stewed in green tea, lime zest and lemon flesh with just a hint of pumpkin.
As for the finish, that’s scorchingly dry and bitter and good.
So the one fault?
It’s not even a fault really, I’d just very much like to try this brewed at a higher ABV, perhaps six or seven percent, to really make this beer jump out at me.