Another Week In Norfolk

I’ve just returned from a week in a caravan in North Norfolk.
West Runton to be exact.
And I should make it absolutely clear that I didn’t, as the opening sentence of this suggests, spend the entire week in the caravan.
We went places and did things too.
What’s more, it wasn’t an overly beery week.
That said beer was drunk and one or two things happened that I think are worth discussing. 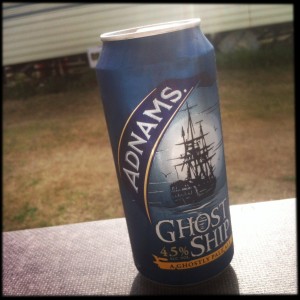 The first beer related thing was a pint of Adnams’ Ghost Ship in The Two Lifeboats (@thetwolifeboats) which was zesty and refreshing and wonderful and went down well with the very nice plate of scampi and chips we had for lunch.
Wandering back towards the car we popped into a shop for some supplies and there I found Ghost Ship in cans and having just enjoyed my pint so much, and remembering how effusive several people have been about this particular canned beer, I bought eight of them.
That evening I opened a can and took a big swig.
It just wasn’t the same.
Still not a bad beer, but lots of the character I had enjoyed that lunchtime was gone and replaced by, perhaps psychosomatically, a tinny metallic thinness.
I tweeted what I thought and witnessed a whole discussion spring up about how I must be wrong, how cans these days are different and how their plastic coating stops any metallic flavours leeching from can to beer.
Stuck as I was with an internet connection that spent most of its time unconnected I couldn’t take much part in the conversation, but what I really wanted to say was that I was as surprised as anybody.
I’ve yet to have a modern canned beer that I’ve not enjoyed – Sierra Nevada’s Torpedo is an absolute dream from a tin – and I generally like Adnams very much. 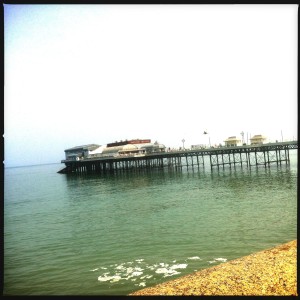 A beautiful morning in Cromer.

The second beer related thing was a visit to the lovely Cromer Farm Shop (@cromerfarmshop).
They have a wide selection of locally produced beers from established breweries like Ole Slewfoot and Norfolk Square, and newer places like Poppyland.
What was interesting here was to see how several of the breweries have decided to tread the same path we see happening right across the country and produce a range of, how do I put it, more challenging beers in 330ml bottles.
Norfolk Square was a particular surprise.
I’m not a big fan of this brewery as I generally find their beer traditional to the point of mediocrity.
They always struck me in the past as too hung up in being Real and as a result produced a raft of identikit Golden Ales in badly labelled bottles.
So seeing their Maverick range with its better label design and wider range of styles I couldn’t resist picking up a Barrel Aged Imperial Stout to try.
Poppyland have taken a similar tack with a range of Saisons brewed with everything from dandelion leaves to kitchen sinks (not quite, but you get the drift), some of them presented in rather nice 330ml cork stoppered bottles.
The march of Good Beer seems to move ever onwards.
This can only be a good thing. 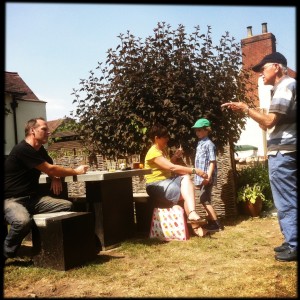 Catching up with Phil in the garden of The Plough, Norwich.

The third beer thing was a trip to Norwich.
After a fantastic tour of the Castle and Museum – Handy tip. You can get a lunchtime pass that gives you an hour between twelve noon and one o’clock for a pound. It’s perfect if you have young children – we headed towards The Plough (@ploughnorwich) to catch up with Phil and the gang from Grain Brewery.
I was supposed to meet Nate (@NateDawg27) there but unfortunately timing stuff when you have two small children and an octogenarian in tow can be a bit tricky and he had to return to work before we arrived.
But bless his heart, he still found us in order to hand over a rather nice looking bottle of Humpty Dumpty Brewery’s Commemorative Barley Wine.
See? Another “traditional” brewery doing a different beer in a smaller bottle.
At The Plough I had my beer of the week, a single hopped (with Amarillo) bitter by Grain Brewery.
It was rich and round and stingingly bitter and, though probably not the best choice for refreshment in the intense heat, it went down very well indeed.
Grain remain my favourite brewery from that part of the world, and not just because they’ve become friends, but because they continue to make beer how they want it, they don’t kowtow to trends, they’ve even stopped worrying about marketing.
And most importantly the beer that they do make, whether in cask or keg or bottle, continues to be very good indeed.
The only disappointment of the day trip was that I didn’t make it to Hayley’s marvellous Window Coffee Shop apart from sticking my head round the door to say a cursory hello as we passed by. 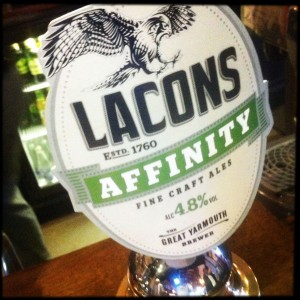 And there you are.
Other notable beers were Green Jack Brewery’s Golden Best (3.8%) which was a run-of-the-mill but drinkable beer, Lacons Affinity (4.8%) which was strangely smoky but not bad, and a bottle of Fantôme, but I took that on holiday with me so it doesn’t really count.
I finished the week as I began it, with a pint of Grain’s Oak (3.8%) in The Village Inn, West Runton, and sitting in the glorious afternoon sunshine I thought about what a lovely holiday we’d had, how happy the kids had been and how many friends I now have dotted across the UK, and all because of beer. 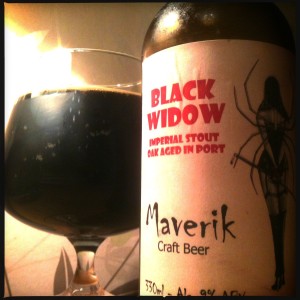 Norfolk Square Brewery Black Widow (9%)
Black Widow is an Imperial Stout aged in oak barrels, which sounds about par for the course from a brewery in 2013.
But is it any good?
Actually yes, it is.
The aroma of this purple black beer is plums in a damp old wooden tea chest.
There’s a big fat treacle toffee and milky coffee malt swimming in cherries and prunes and steeped in brandy.
Over this there’s damp woodland leaf litter, a red-brown crispness and a whole load of hazelnut and acorn pithiness before a chocolate and rum finish that’s rich, warm, and really rather sexy.
Very good indeed. 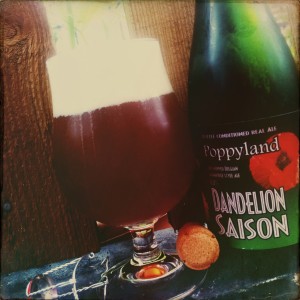 Poppyland Dandelion Saison (6.3%)
This is quite delightful.
It’s a Saison from Cromer brewed with dandelion petals and dry hopped with Sorachi Ace, and it positively sparkles with life.
The smell is pickled bitter lemons and meadow flowers, and the beer fizzes in my glass, its large fluffy head like an enticing cloud.
As you take a mouthful you are immediately struck by the bitterness, it’s knife sharp and steely clean with the Saison yeast adding a soft spicy bread dough to the light honey of the malts.
Sorachi Ace is a big punchy citrus hop and here it’s bordering on huge.
Great hits of fresh lemon rind, melon and lime juice slice away at your tongue.
But underneath there’s a subtle and rather lovely earthy soil-under-your-fingernails outdoors flavour that I’m guessing is the dandelions doing their work.
It’s bitter, almost to the point of sourness, and leaves a finish that’s palate cleansing, refreshing, crisp and entirely satisfying.
A lovely beer beautifully packaged, but why bother with the, “Bottle Conditioned Real Ale” tag?
There’s simply no need. 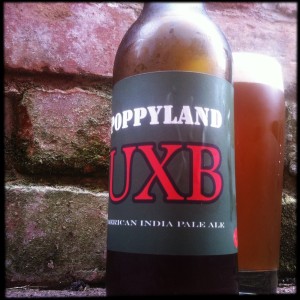 Poppyland UXB (6%)
Sadly, given how good the Saison was, this IPA was off.
The problem of hand bottling I guess.
It should have been a hop heavy amber coloured IPA that does all the things I’d want, but instead was a sour washing up liquid soapy monster that went down the sink.
You can’t win them all I guess, but at £5 a bottle it was a rather painful experience.