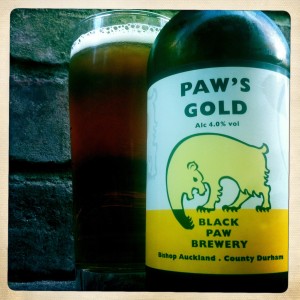 Oh, now I do like this.
Paw’s Gold is a crisp Pale Ale that pours a very nice bright orange and smells of straw and honey and broken biscuits.
And that’s pretty much where the flavour begins.
Lots of dry crumbly biscuits munched in a field of hay with a Werther’s Original and a cup of weak black tea.
That’s the malts for you.
The hops are woody, crunchy and leafy things, doused in lemon juice and apple skins.
Paw’s Gold finishes with a sweet grassy bitterness that’s crisp and refreshing and flecked with spicy black pepper.
Very nice indeed.