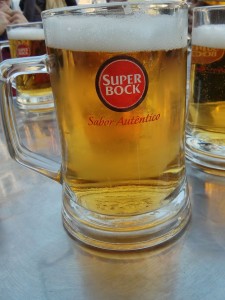 I spent a few days in Porto on a stag do last week and thought I would write up about the beers I had during our stay. We didn’t come across any dedicated bars in Porto and beer is sold in cafes and restaurants as a matter of course.

The biggest brewer in Portugal is Unicer which is part of the Carlsberg Group. Not looking good so far is it? They brew a number of beers under the Super Bock name rather than just the one beer as I thought.

The leading brand is simply known as Super Bock and is a Pilsner ranging from 5% to 5.6% depending on bottled or draught versions and who you spoke too. It’s amazing how something with a bit of strength can taste so bland. Even in the heat of the Portuguese sun (38c if you’re asking) it didn’t really satisfy past the initial gulps. Sadly it was everywhere and that’s not to mention the advertising and Super Bock flags flying all over Porto.

There was also Super Bock Stout – the black one as the waiters called it – (bottled, 5%) which had an initial chocolate taste giving way to a bit of fruit. Whilst it was a bit on the thin side it wasn’t a bad beer. I didn’t find it on draught though.

One brewery that gives Unicer a run for it’s money for a share of the market is Sociedade Central de Cervejas and they brew several beers under the Sagres name. Our hotel had a drinkable lager on draught called Sagres F-Max (5%) that had floral and fruity aftertaste (possibly grapefruit) but we didn’t see it at all outside of the hotel. It’s a shame as it was much more pleasant than Portugal’s most popular beer – it must be that subliminal advertising!

The best beer we found was discovered in a couple of Restaurants. We visited one called Restaurante Abadia do Porto and was pleasantly surprised at the quality of beer – unlike most of the food! – on offer. Here Unicer brews, just for this restaurant according to our waiter, three separate Super Bock beers.

These were a Czech style Golden Pilsner that erred on the sweet side (4.9%), a Belgian inspired Double Gold (7.5%) and a German Bock (strength unknown as we didn’t order it). These came in 750 ml bottles and cost 9 Euros each. Both were a welcome deviation from what we had been drinking so far and both went well with my grilled Octopus. 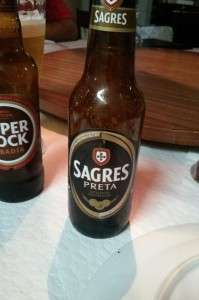 The second Restaurant we found a decent (and very cheap 1.60 euros 33ml bottle) supply of beer in was Restaurante Nova China – by this point the poor Portuguese cuisine, with the exception of my cephalopod mollusc, had got to us .

Here we tried Sagres Preta (4.3% abv) a German style dark beer which was smokey and malty.  There was also Super Bock Abadia (6.4%) which was a wheat beer almost red in colour hence it’s name on the menu as Super Bock Red.  It was interesting but not enough to stop me moving back onto the Super Bock Stout once the Preta had run out – thanks John!

It’s not all about beer in Porto though and we spent a day visiting the various Port Lodges that are an important part of the history of the city and most of which were founded by British merchants. But that’s another story!