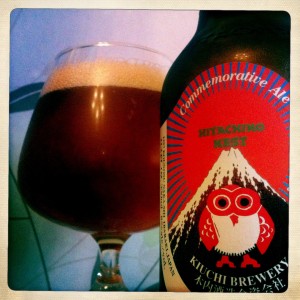 Brewed with coriander and cinnamon, Commemorative Ale is an exercise in brewing brilliance.
What I’ve found over the last few days of drinking beer from the Kiuchi Brewery is that there’s a deftness of touch, a delicacy to the beers bearing the Hitachino Nest name that very few breweries achieve.
The smell here is Jalebi, incongruously a Bengali sweet that’s rich and sugary.
This is one of those beers that defies being broken down into hops and malt.
There’s an enormous bruised apple body, thick with honey and toffee brittle.
The cinnamon lends a delicious earthiness and then leaves a lovely warm feeling on your tongue.
And then there’s a snappiness towards the end that’s equally green and herbal and rich, round and fruity.
As you swallow this Commemorative Ale it dries to a gently bitter stain on your palate that just begs to be repeated.
Hitachino Nest are very special indeed.