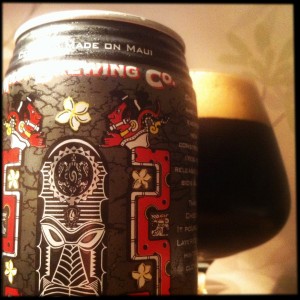 Maui’s Belgian Stout with chocolate and spices is, so far, my least favourite Maui beer.
But even with that said it’s a pretty good stout.
It pours a dense blue black and smells of stewed plums and chocolate syrup.
There’s a hefty bitter chocolate and espresso malt served on a tray full of biscuits, and over this there’s cinnamon laced, spicy, leafy autumnal hops.
The only fault?
It’s rather thin, a bit watery, just not stout enough.
Perhaps if Maui had called this a Porter I’ve not even have questioned it.
The psychology of a beer nerd can be a real bitch.