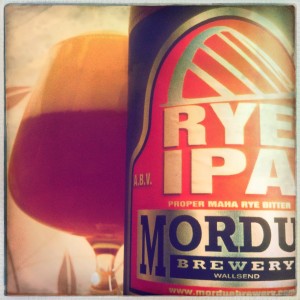 As you probably already know, I really like rye beers.
Sadly I’m struggling to find any in here.
This is a decent IPA that pours a rich amber with an enormous head and smells of oranges and honeysuckle.
The malt has a light croissant pastry thing going on and a pinch of crushed peppercorns, but there’s none of the rich and earthy pumpernickel that you’d expect from brewing with rye.
Instead there’s a searingly sharp lemon juice and grapefruit flesh hop that rips at you and gives no quarter as it leads you into a finish that puckers your cheeks and scrapes your teeth with its harsh dry bitterness.
So, a decent IPA, but they seem to have forgotten the rye.