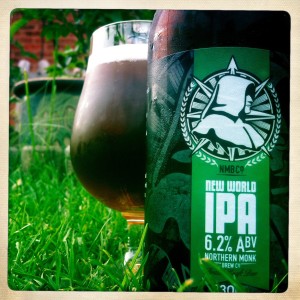 So, David of Broadford Brewer fame, whose home brew I have written about in glowing terms, has gone professional.
Quite right too.
And what a way to announce yourself.
A big, juicy, delicious IPA wrapped in an excellent label.
Even as you pour you know this is going to be good.
It looks just right – a glowing golden orange – and smells great – a rich, slightly salted tropical fruit salad.
This is a hop heavy beer.
That’s not to say the malting lacks anything.
There’s a big voluptuous blob of Munchies goodness, sweet and thick and slightly biscuity and very satisfying.
But it’s the blend of British, American and Australian hops that’s the star here.
It provides lemon rind and grapefruit form the United States, passion fruit and kiwi from the Antipodes, and a big thwack with a bunch of fresh green stinging nettles from the Brits.
All this and a long, crisp finish.
David, this is great.