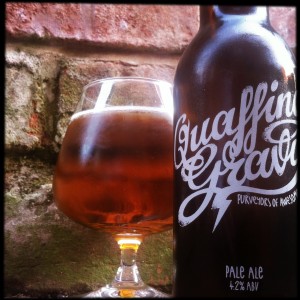 “Purveyors of Awesomeness,” says the bottle.
Certainly I like the bravado, and I really like the screen printed bottles.
But is the beer inside any good?
Well, yes it is.
Though it’s not exactly what I was expecting.
These days I have gotten so used to new breweries’ beers being huge hop monsters, that I pretty much expect it.
But this is a soft and subtle beer that seduces you quietly instead of forcing its tongue down your throat on the first date.
The smell is caramel flap jack, plain and simple.
There’s a good soft biscuit and honey malt and some lovely Cascade hops.
Not a face full.
Just a nice grassy, lemony twang that’s softly bitter and pithy with summer garden flowers.
My only criticism would be that I’d like a little more in the finish, a little more bitterness to counter all this gentle roundness.
Other than that this isn’t far off the, “awesomeness in your dink hole,” that te label proclaims it to be.