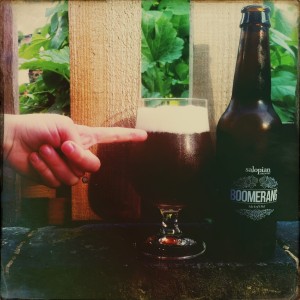 Another beautifully presented new beer from Salopian who, over the last few months, appear to have moved up and into a whole new realm of brewing.
Where Oracle and their flagship Darwin’s Origin were and are brilliant, Vertigo, Automaton and now Boomerang are quite simply a class apart.
Boomerang is an Antipodean Pale Ale hopped with Nelson Sauvin, Riwaka and Galaxy and gives you a pungent tropical fruit sweetie, melon, papaya and kiwi aroma and a big frothy head.
There’s a mouth filling chewy toffee malt that feels really satisfying as it melts away leaving behind a runny honey coated peanut brittle that hands you a super hoppy blast of fresh leafy herbs and then masses of grapefruit, passion fruit, sherbet and mandarin peel with just a hint of rolling tobacco.
The finish is a sharp, clean, bitter smack with a lemony stick and it leaves a bruise that you’ll want to show off.
As I said at the start, Salopian are moving on up.
Errr, look out!

One Response to Salopian Brewery Boomerang (6.9%)