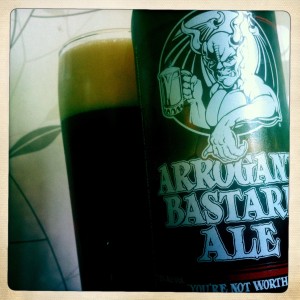 Yes this has been written about before.
Gushed over before, praised and drooled over before.
But not by me, OK?
Arrogant Bastard Ale is one hell of a big bullying rock’n’roller of a beer.
The colour of a dead chestnut mare, tanned and tailored into a bad biker’s jacket.
The smell is pissed up, pissed off fruit shortcake and the malt is thick headed neanderthal biscuit that’s bruising for a rumble with hops as their secret weapon.
They’re stingingly sharp citrus chains hidden behind a thug’s back.
There’s an old seven inch single that I love to death and listen to when I want to be fuelled with adrenalin and jump about.
Cool as all hell, the cover photo is a picture of the band pissing on the statue of a rock’n’roll legend.
Arrogant Bastard Ale is the beer equivalent of The Motards “Yo! Love Mexico.”
Take that chumps.