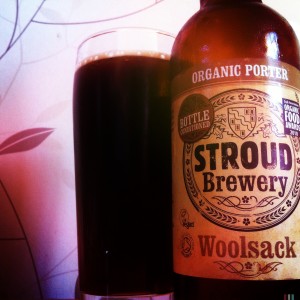 Bottle Conditioned, Vegan Friendly and Soil Association Accredited, a more cynical person might argue that this beer is hiding behind too many badges and so probably not up to much.
But they’d be wrong.
Woolsack is an organic Porter and it’s not bad at all.
The beer pours a deep mahogany with a smell that’s all chocolate coated raisins.
The malt is well baked digestive biscuit with a big blob of treacle toffee and lots and lots of prunes and raisins.
The hops are crispy, crunchy brown leaves and a lovely bitter hit of tamarind that leaves a finish that’s long and bitter and really rather good.