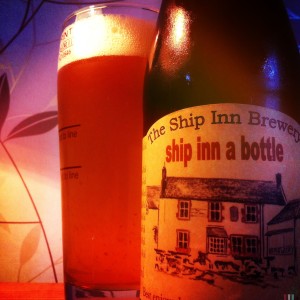 Writing about something, whether it be beer or food or music or anything, sometimes means having to say things that are negative.
It doesn’t make me happy to write a bad review, but then it doesn’t make me happy to buy something and be disappointed with it either.
So, here we go.
This is not a good beer.
It may be micro brewed at The Ship Inn, Northumberland, and when drunk fresh from a cask in the pub it might be OK, but this bottle is just a badly made home brew.
A Pale Ale with a frothy head but a smell that’s closer to lemon washing up liquid than anything edible, there’s a droopy sweetcorn and fudge malt and some weak and feeble watery lemonade hops.
Sugary, slightly citric, but altogether flimsy.
I poured this away.