We Just See The World In A Different Way: The Bad Seed Brewery

They make a lot of rules
They tell a lot of lies
If we don’t wanna, we won’t behave
And they can’t make us, ’cause we can’t be made
– Beat Happening “Bad Seeds”

Recently, while going through my Twitter feed I noticed a new brewery had started making a noise and was immediately drawn to them by their logo and artwork.
I can be a sucker like that, but if something looks good then I have to check it out.
Right?
So I had a chat with them and this is what I found.

Hello, who are you?
Hello!  We’re Chris and James, the founders, brewers, secretaries, delivery men, cleaning staff and all round dogs bodies of Bad Seed Brewery. 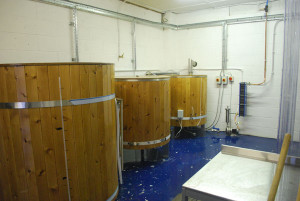 How, why and when did Bad Seed start?
We first met whilst rowing a boat!  A passion for great beer brought us together and we’ve been home-brewing for years. It soon became clear that when we worked together, playing with recipes and bouncing ideas off each other the results were incredible and the Bad Seed was planted.
In terms of a pro-brewery, we’re incredibly young – about 7 weeks old. We believe all adventures begin with the Bad Seed of an idea and this is our adventure, making a living from what we are passionate about. 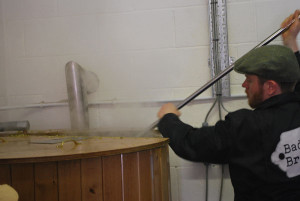 The initial core range of four bottled beers – IPA, Pale Ale, Saison and Stout – Could you explain what made you opt for these particular styles?
Because these are the beers we love to drink! We’ve been playing with these recipes on the homebrew system for years, endlessly tinkering with the recipes – we were so pleased with them we wanted everyone to try them.
All four beers have been influenced by the micro-brewing scene in the States, that’s really where we take our inspiration from. We’re both self confessed hop heads – the hop is very possibly the greatest flower known to humanity – so IPA was always going to be on the cards. Hop oils are so elusive and we love finding inventive solutions to be able to trap them in our beer!
It’s endlessly fascinating to us how the same ingredients grown in different parts of the world taste utterly distinctive. This is well known in the wine world as terroir. New Zealand is producing some of the most exciting hops in the world at the moment so we were desperate to show these off in a South Pacific beer.
When we started working with the Saison yeast two years ago very few people had heard of it as a style, now it seems it will be the craft drink of this summer. The Saison yeast has a peppery finish, so decided to boost that slightly with grains of paradise and ginger.  We’ve found the Candi Sugar used in most Belgian styles to be very drying, so we opted for honey instead – it’s our twist on a classic style.
We love coffee almost as much as we love beer so an Espresso Stout or a Coffee Porter seemed inevitable.  However all the other ones we’ve tried are almost like drinking a pint of coffee – frankly you can go to Starbucks for that.  We want to use the coffee to enhance the beauty of a stout – so the two are working together in harmony. A perfect marriage! 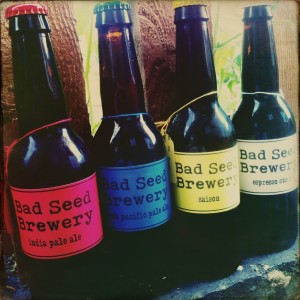 I’m a graphic design geek, and as such I love the Bad Seed branding. It’s what initially drew me to the brewery. It reminds me very much of old LP covers from the likes of K Records (Beat Happening, Halo Benders, etc.) Could you explain where the idea came from?

Thanks!
It all sprung from what we were doing at home to help us tell the beers apart. James used blue caps on the beers we made at his, and Chris used red.  When we did our first wheat beer Yellow seemed strangely appropriate. We were brewing so much at home that we needed to be able to tell them apart in the garage, so the swing tag seemed an obvious solution, with the name of the beer on the back.  We wanted to keep that hand stamped, hand crafted effect because everything we do in the brewery is done by hand – each bottle of beer is unique in it’s own way!
As for the label itself – we wanted to keep it as simple as possible, so that the focus was on the quality of the product inside the bottle rather than on any gimmicky logos. We think beer should be appreciated like wine, the aroma is important and each sip is savoured – as Garrett Oliver says beer can be as if not more complex than wine, after all it’s got more ingredients. We wanted to make that association clear with our labelling.

What kit are you brewing on?
We’ve got a four barrel system that was installed by Dave Porter, director of PBC Installations. Dave has a wealth of experience, he’s the Obi Wan Kenobi of the beer world, and the leading installer of micro-breweries. He’s an incredibly busy man at the moment with the explosion in the number of micro-breweries in the country.  Not only does he have a six month waiting list, but if you miss that one date then you’ll be waiting along time for next free date. Needless to say getting everything ready for our “birth date” of May 28th was quite hectic, but totally worth it.  Even then not everything went to plan – we managed to blow out the electrics for the entire building on our very first brew!
All of our beers are currently going into bottle, both because this is what we have most experience of working with as home brewers and so we can find our routes to market. Most importantly we’ve found this gives us a high level of control over the quality of the beer in each bottle.  We’re bottling each of the beers by hand – when you’ve got about 1800 bottles to fill you’ve got a long day ahead of you!  Our current brewery record  is twelve and a half hours.  Whilst we want to take Sir Dave Brailsford’s approach of marginal gains to improve our brewery record, training in a wind tunnel didn’t help as much as we thought it would…
It’s a labour of love, and we believe the results are totally worth it. Filtration strips away flavour from beer. We’ve tasted the same beer filtered and unfiltered and they were unrecognisable beside each other. Unfiltered is infinitely superior, bottling by hand lets us keep all of those wonderful flavours in our beer.

Where are you going next? What are your plans?
There are a few small tweaks we want to make to our core brews. These are the first brews on the big system. It’s like cooking in someone else’s kitchen, and beer behaves differently in different quantities and we want to lock these beers down.
The next new beer we’ll be brewing is a Hefeweizen – one of the first German beers to break the Reinheitsgebot.
Strict rules about beer are pretty silly, so we love this brazenly tasty rule breaker. Our old home brew kit is now our pilot system in the big brewery, we’ll be launching a small batch experimental series in the next couple of months. This is a chance for us to turn the brewery into our playground, turning preconceptions about beer on their head – classic combinations and strange concoctions. Every brew will be different, weird and wonderful.
After that… who knows ..but it will be an adventure!

And here’s what I thought of the beer. 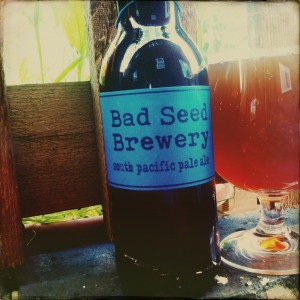 South Pacific Pale Ale (5.8%)
This is a fruit salad in a sweet shop.
Pouring a warm amber, the smell is Fruittella and pine cones.
The malt is sweetly sticky, full of toffee, bread crusts, a little nutty bark and a splash of sesame oil.
But it’s the New Zealand hops here that make this beer more than just good.
They’re full of fresh fruit juice, zesty and bright with citrus peel.
Lots of kiwi, melon and peach for roundness and lashings of sharp bitter lemon, satsuma and pink grapefruit to slap your tongue about.
If I could change one thing, I’d like it just slightly fizzier.
Very good indeed. 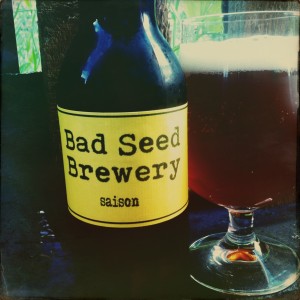 Saison (6%)
Now this is a little bit special.
Not any old Saison, this is a Bad Seeds Saison.
It’s a beautiful golden beer with a big fluffy head and a smell that’s full and sweet, rich and loud with lots of honey and spiced apple cake.
The malting here is caramel and brioche, but it’s accented by the addition of honey, ginger and grains of paradise that add a very sexy sweet spiciness to what’s already a good earthy bread dough and walnut yeast backbone.
And then the hops give you a thwack with the bitter stick.
They’re nettles and brambles and they lead to a big satisfying hug of a finish.
Cool. 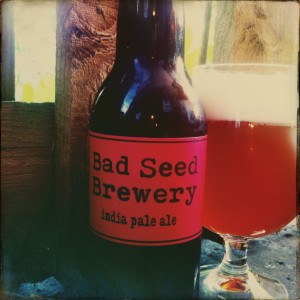 India Pale Ale (7.3%)
Brewed with Cascade, Chinook and Columbus, this is one hell of an IPA.
Its head is big and feisty, its colour is conker red, and its smell is redwoods, pine resin, marigolds (no, not the gloves) and orange marmalade.
There are roasted pine nuts in the malts, and they’re embedded in toffee that’s slightly singed at the edges.
And the American hops kick ass.
Lots of roughly sawn wood, resins you could season a cricket bat with, and big grapefruit pips with faces drawn on that leer at you, taunt you, invite you to a tongue wrestle.
Don’t bother, they’ll win.
This is how an IPA ought to taste. 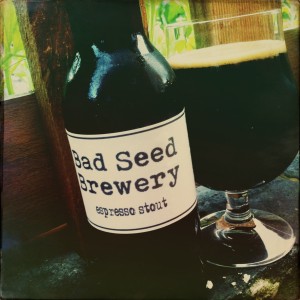 Espresso Stout (7%)
I’m not entirely sure what to say.
I don’t want to come over all gushing.
But this is good.
Very good.
There’s plums and chocolate and biscuits and rum and raisin.
And there’s a big splash of black coffee.
It’s warm, rich and satisfying.
A black chewy espresso smell and a sticky, creamy, delightful feeling on your tongue.
The finish is green hazel twigs and purple wine gums.
Delicious and delightful.

Thanks to Chris and James for their time and their beer.
You can find out more about them by visiting the Bad Seed Brewery website.

2 Responses to We Just See The World In A Different Way: The Bad Seed Brewery