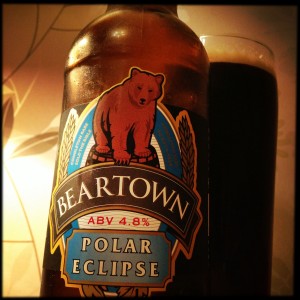 I’ve not been a huge fan of this brewery in the past, but Polar Eclipse is pretty good.
However, for me it feels far more like a Porter than a Stout.
I know that that’s a matter of conjecture, and I know that if a brewer says it’s a Stout then it’s a Stout.
But my personal yardstick is based on how thick or heavy a beer feels and how fruity it is.
I tend to think of Porters as being far more fruity than Stouts.
And this is very fruity indeed.
Polar Eclipse has a very nice chocolate and coffee malt, a smell that’s red and fruity, and a body that’s packed full of lovely stewed prunes, strawberries and black cherries.
There’s a decent brown leafiness from the hops too, all crunchy and dry, brittle and sharp with blackberry leaf tea.
There’s a light smoky burned toast thing going on in the background too which is rather nice too, but there’s not the heavy and comfortingly thick richness I’d expect from a Stout.
And so, whatever you might want to say, in my opinion this is a Porter.
A very nice Porter, but a Porter nonetheless.