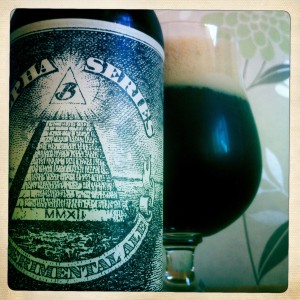 Part of Beavertown’s Experimental Series, this is the first beer form this brewery that’s not blown me away.
In fact it’s pretty nondescript.
Dark malts and Saison yeast?
Fine, but it doesn’t really do anything.
You can smell the sour dough of the yeast and the beer looks nice in your glass as it lies there with its fluffy cream head.
But there’s not enough of anything.
The malts barely show you any chocolate or toffee, just the mildest of hints.
The hops are almost absent, and the Saison yeast simply adds a lightly spiced huff n the background.
Ok, one could argue that this is an experiment and that’s all well and good.
But should you unleash every experiment on the public?
I’m not so sure.