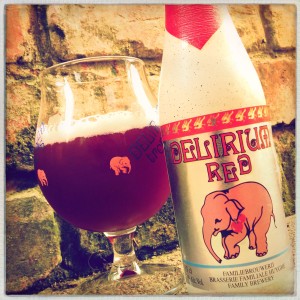 I’m really very disappointed to see not only sugar, but also flavourings and sweetener listed in the ingredients of this beer along with the cherries and elderberries.
I wanted to really like Red, I wanted to like it in the same way I like Delirium and Nocturnum, but it’s just too sweet and sickly, much like the Lindemann’s Bacchus I once bought from Sainsburys.
I want some bitterness, some sourness from the fruit, a tart kick that makes my eyes water.
But mainly I don’t want to not like a Delirium beer.
But I don’t.
I don’t like it.
It’s rather like an alcopop in fact.
A big sticky, sugary, blast of booze in a bottle.
Boo.