In all honesty, I am not sure what I was expecting. We have all drunk Italian beer. Peroni, in some city centre bar where your options are really, really limited. And you get stung for the £5 pint of cold, gassy (bugger, the best word that I can come up with is) lager.  A little bit disappointing, depressing even. This is not what was planned.  So how is two weeks in Italy going to pan out?

To make life harder, we have arrived in Tuscany. In the heart of a wine producing area. Awash with tourists and the outlets aiming to send them home with a three pack and a glass for a very reasonable €20. We are those tourists, but with a slightly different agenda. 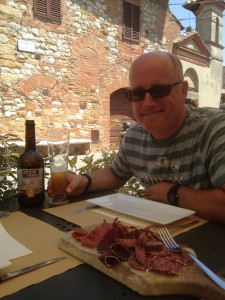 I need to cough to something. Fifty this year and this is my first ever holiday in this country. We have come expecting it to be France but with a different language. Wrong! On many levels. There is none of the innate surliness of the French, attempts to speak the language are met with merriment rather than derision, the countryside is bathed in a soft light that reflects the natural hues of the landscape and the food has a modest simplicity where less is certainly more.

And my limited research has suggested that there should be beer too. Breweries with fantastically Italian names, others with names that hint at new world influences. The issue will, of course, be availability.  And getting there. The flight from Gatwick is at 06:30. We leave home at one. Lane closures on the M1 slow us down, but the car is parked, we are checked in and enjoying a Wetherspoon’s breakfast with plenty of time to spare. The beer on offer is nothing special, but for once I miss out on the traditional airport pint, the flight is a short one and I will be driving at the other end.

Four adults and their luggage. A Fiat Panda. Amazingly it swallows it all, we packed sensibly, but there will be no room for shopping and after endless hours of travelling, we dump the ” kids” at the villa and head for the supermarket. Neither of us in the best of humour and we need to shop for at least a couple of days. 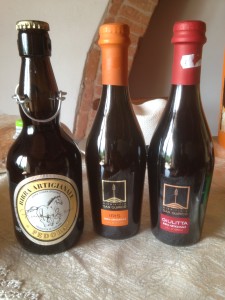 If there is logic to supermarket design ( and there really must be ) you would have heavy stuff at the beginning (beer and wine) squashy stuff at the end (fruit). No logic here, the trolley is groaning under the weight of thirty-six different varieties of tomato before we get anywhere near the business end of the shop. At first sight I am overcome by a Blitzkrieg of German brewing strength. I didn’t come here to drink Warsteinner, Becks and the like. Or the massed ranks of Tennant’s  on offer (although I did try some).  But tucked away to the side there is a collection of more interesting, and massively more expensive, bottles. I recognise none of the names and have yet to find any internet. This is blind purchasing. It has to be Italian, there is some Belgian beer amongst this lot, and not over the top money wise. I choose a round half dozen and top up with what looks to be standard fayre from the reassuringly cheap selection of local Heineken brews that I stumble across. Now we just need to get them home and chilled.

I have no qualms about throwing bottles in the freezer when required. And a good few are introduced to the ice box when we get home. Then it is a matter of time to cool them down. 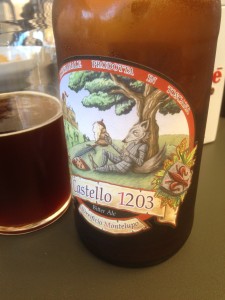 OK, so starting with Birra Moretti was never going to really be a high, though it is a local staple. The Gran Reserva Rossa by Birra Peroni that followed was an agreeable Vienna Lager. But I was really starting to hope for better. Much, much, better. Or face a Turkeyesque fortnight of blandness. And failure.

Sometimes you see a label and it gives you a sense of hope. Google “Trentatre Dorata” and remember the first time that you saw “Calm Down and Carry On”. Simple, but appealing. And a beer to match. Bubble gum and grapefruit make this a hit in my mind and it remains one of the top beers of the holiday to the end.

The local town is a hot 5km walk. A chunk of it uphill. It has to be walked in the heat of the day if I fancy a beer “out”. I make it most days as we aim to do trips in the morning to get the girls back to the pool for the afternoon. The local bar is pleasant enough and welcoming. Not much in the way of excitement though and my reward for the hour long walk tends to be a couple of Nastro Azzuro and a much needed litre or so of water. But Montefollonico has more to offer than Bar Sport. La Botte Piena is a wine bar come bistro in the heart of the town. Seemingly popular with visitors and locals. The latter sensibly hiding inside in the cool as the former watch the world go by beneath canvas awnings that would have pleased even Billy Smart.

We walk past a couple of times, admiring the plates of food on offer. In particular the cold meats. I am a sucker for charcuterie and have been known to dabble with my own hams, chorizo and sausages so a decent platter will always catch the eye. The shelves stacked with wines at all price points certainly catch the eye too and whilst wine really isn’t on my agenda, I’ve not drunk red for five years or so, I do appreciate a well stocked store , so pop inside to see what is on offer. And there, above the fireplace (and requiring me to stretch to the full extent of my 5ft 8ins) is a shelf of beer. 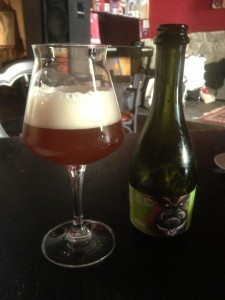 Did I mention research undertaken for this trip? Several pages of info printed out and stuffed in the man bag. Hardly any of it helpful in this neck of the woods as it turns out. The internet has been my saviour. £5 a day seemed steep at first, but for unlimited data roaming, 3 have me hooked. And a Twitter contact @dm27 has kindly pointed me in the direction of a handy article in the Guardian that suggests not only beer places but a handy app for tracking down all things beer related when in Italy. So I can tell that some of these are from a brewery 10 or so kilometres down the road. Others from further away and one is actually on my Untappd wish list ! Prices range from €9 to €15 but at least we are looking at 750ml bottles. I select a Birra Bafalo Chery 30/03. It doesn’t exist on Untappd, nor on my new favourite app. It is from Tuscany though, says so on the bottle. And what a beer. Masses of black cherries and a riot of pretty much everything that would convince your senses that you were in an ancient church in a far away land. Incense, tapestries, grief and joy somehow make it to the glass. This really is something. If I didn’t have a picture of the bottle I might be doubting myself looking back though. But it is a beer that I drank again on our last day. If you ever see it, try it. 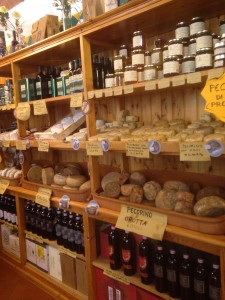 One thing that Tuscany is not short of is delis. Packed with shelves of cheese, hams hanging from the ceiling and beer bottles hiding amongst the wine. Sometimes quite seriously hidden. But worth looking for. Yes we are doing the supermarket and drinking the Birra Moretti to keep costs down, but there are plenty of €6 bottles to be found. And even the odd bar with unexpected treasures on offer. One of which, cafe 909 in yet another hill top town, offers up Fiera from Birra dell’Eremo. As good an IPA as you might hope to find on the West Coast of the USA, and a bar that could easily be in Memphis, exuding an easy musical vibe.  My only regret was that it was two days after IPA day and we didn’t have time to sample the rest of the range that was on offer, or actually hear anyone sing. Eldest daughter was very tempted to belt out a tune it has to be said.

So by a mix of supermarkets, wine bars and local delis I am getting to sample a good few very decent beers. A lot of them have massive Belgian influences. There is the occasional English Pale or Bitter, Birrificio del Forte Meridiano ° being a fine example of the latter. But in the way of holidays, time is moving on and the airport beckons. We have an early flight from Pisa. Pisa is a 180km drive. I am not mindful to get up at five am on the last day of the holiday, so a room is booked in Pisa for the final night. And it gives us too opportunities, the first is to have a beer in a proper university town, the second is to do the same at night. Because it turns out that the two things are quite different. Remember the Guardian On-line article referenced several inches (cm) up the page? Turns out that it has a recommendation for a bar in Pisa. Student hip brewery tap sort of a place. Turns out that it is shut when we visit at five. Shut and shuttered up, maybe never to open again. The exterior offers no clues. We walk on, one member of the party just a bit unhappier than the rest. 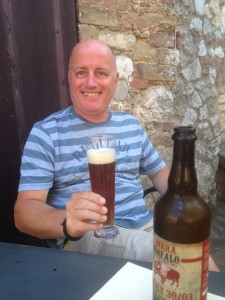 Di Qua d`Arno is not exactly heaving. It does serve a selection of Wold Top bottled beers strangely. These are ignored, when in Pisa and all that. The beers from Birrificio Montelupo that are on offer entertainingly labelled and a real find.  The Castello 1203 provides an aniseed hit and a following chunk of malt. Wife declares it her beer of the holiday.  Food follows. Accompanying beer is below the radar. And I am going to try that bar again.

Orzo Bruno is jumping. The taps at the bar are dispensing beer from I’ll Piccolo Birrificio Artigiano, although in all honesty it takes close analysis of the pictures later to work this out. Martesana, an English Pale Ale at 5% stands out. All are good. We stay a while.

And we are done. I travelled not knowing what to expect. With certain names lodged in my mind. That I missed. The power of twitter gave me help. Great holiday. Great beer. Just booked for next summer. Give Italy a go.