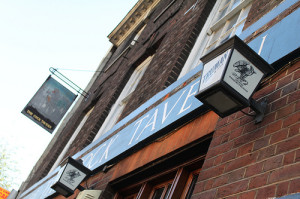 If you told me back in the day that I would have been eagerly looking forward to a pint at The Cock Tavern in the centre of Hackney I would have said you were mad. As a pub it was one of the worst of a bad bunch and that is no mean feat I can tell you.

However with the wave of micro breweries being established in the borough (and just beyond) a number of pubs have relaunched themselves (Clapton Hart and Crooked Billet to name but two) alongside established real ale houses giving Hackney beer drinkers more choice than ever which rankles with this ex resident somewhat!

As for The Cock Tavern I heard it had a large number of hand pumps so I ventured along. It hasn’t changed much interior wise despite it’s reopening almost a year ago now. Certainly brighter and aside from the pool table missing they seem to had inherited some of the wonky furniture and sadly the toilets too – hold your nose! There were a number of hand pumps on with a mix of beer and cider. However what I didn’t realise was that the pub is the Howling Hops brewery tap which is a small micro brewery located below the pub and as you would expect in that case their beer dominated the pumps.

As it was a school night I plumped for two. The Howling Hops Poacher Elderflower at 5.8% was incredible. A golden beer packed full of floral, fruit and spices. It was hoppy and dry thanks to the Citra and Amarillo hops. This was a seriously quaffable and thirst quenching pint belying it’s strength.

The second beer was I tried was the Howling Hops American Light Ale 4.2%. It was citrus packed with more than a hint of grapefruit and tropical fruit but I found that this beer had a strange, almost creamy, after taste and I am not sure if it was due to my taste buds still reeling from the previous pint. Next time I visit I will make it my first choice!

The chances of you drinking a Howling Hops beer on draught outside The Cock Tavern is remote to say the least so if you are in the area I would recommend you dropping in. The now standard hipster Hackney beard is not mandatory!

One Response to Cock A Hoop