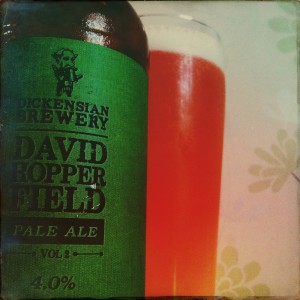 Not a patch on the Wheat Beer, David Hopperfield is Dickensian Brewery’s Pale Ale.
And it’s lacking a lot of oomph.
The smell is lightly (very lightly) citrus with a hint of mown lawns.
There’s an alright bite from the hops, lemon juice and garden foliage, but the malt is far too weak and this lack of body makes the beer feel very thin and insubstantial.
The finish is dry and crisp, but again it suffers form this lack of substance and as a result it disappears far too quickly.
Disappointing and, after being enthusiastic after trying the Wheat Beer, I’m now concerned about what I might find with the final bottle I have to try.
Source: Best Of British Beer