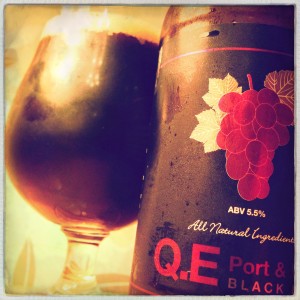 When I was told that Elgoods had decide to brew some new beer after taking advice from Belgian brewers I was intrigued.
You see, I don’t like Elgoods beer very much.
But they have open squares to make their beer in and supposedly they wanted to use them to make some more interesting brews.
There are four available at the moment and this is the first I’ve tried.
It may be that Elgoods’ pasteurisation has killed the aroma here, as there’s very little to get your nose around.
QE Port & Wine is the brewery’s Black Dog Mild enhanced by ageing.
But there’s something wrong.
Some of the flavours are quite interesting, quite nice.
But they taste fake.
This beer taste of flavourings, though I’m sure the brewery would say that there are none here.
There’s a light, slightly thin, chocolate and then some fruitiness that hints at port or red wine, but it taste so much like it’s been flavoured that I can’t take it seriously.
The finish is sticky with sugar and rather sickly.
I hope the other three, two wheat beers and a stout, are rather better.