Some time ago I wrote a review of a beer in the style of a letter as I thought it’d be fun.
This time though, this isn’t anything more than an open letter to Dave Bailey, Owner and Head Brewer at the Hardknott Brewery. 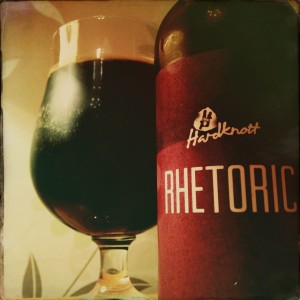 Dear Dave,
I am currently drinking Rhetoric II and it’s absolutely astonishing.
It’s also got me thinking.
We’ve known each other a couple of years now and you’ve always been very supportive of what I’ve been trying to do.
You’ve also been honest enough to put me right when I’ve said something wrong or just plain stupid.
This makes you a good guy, a friend, and a bit of a hero.
But regardless of all that, you don’t ha;f make good beer.
And so here are my thoughts on Rhetoric II:

Thanks Dave, you rock.