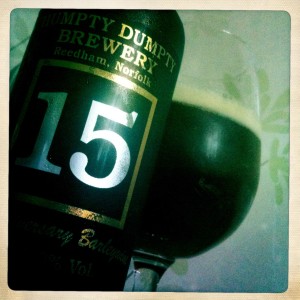 This “15th Anniversary Barley Wine” was very kindly given to me by the lovely Nate (@NateDawg27).
Brewed to celebrate Humpty Dumpty’s fifteenth anniversary, I really wanted it to be good.
At least as good as their Double W, but it’s not.
It has a harsh bitter, urinal hum and a bite to it that’s soapy and a little too much like lemon washing up liquid.
Where the malts should be boozy rich biscuits, instead there’s a rather unpleasant bile acidity that leaves a taste on the back of your tongue that’s a bit too much like you’ve just been sick.
It went down the sink.
Sorry Nate.