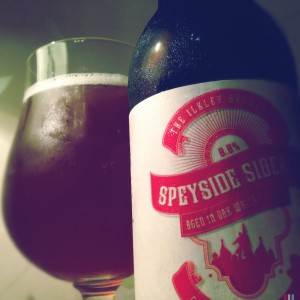 Are you sitting comfortably?
Then I’ll begin.
Once upon a time a lovely young woman who happened to be a bit of a beer geek made a beer with a brewery from the dark and spooky North that happened to be rather delicious.
Little did she know that when her back was turned the evil wizard of the brewery poured lots of her special brew that they had named “Siberia” into magical Scottish Single Malt Whisky barrels and hid it in his dungeon for seven long months.
The resulting potion emerged from the dark as a beautiful but dangerous big beer wolf.
Our delicate and innocent Little Red Riding Melissa went to visit her Northern friends to find them eaten and a strange beast in their place.
“Oh! What a big beautiful woody smell you have,” said Little Red Riding Melissa.
“All the better to tempt you in,” smiled the wolf.
“And what an amazingly round and spirit tinged malt you have,” said Little Red Riding Melissa.
“All the better to lure you closer,” winked the wolf.
“Oh, and what a big fat yeasty dry and gorgeous leafy hop coated rhubarb and custard kiss you have,” said Little Red Riding Melissa.
“All the better to get you stupidly drunk so that I can take advantage of you”, snarled the wolf.
The beer jumped from its bottle and made for the girl, but a keen drinker was close by and in one, or several, gulps the beery monster was gone.
Speyside Siberia is a fairytale of a beer.
Drink it before the baddy wins.