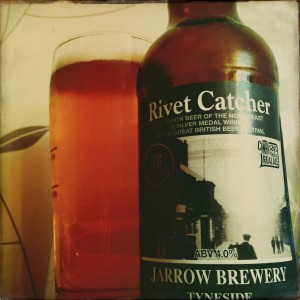 Before I tell you about how this beer tastes I need to say something.
It’s something that might bring out the trolls, but I need to say it.
In what way is this bottle of beer “Real Ale” other than the fact it has the “CAMRA Says…” label on it.
It’s filtered, there’s not a trace of bottle conditioning.
So, could you please tell me how that works?
Because if this has been called “Real Ale” in a bottle by CAMRA, then all the other filtered bottles are “Real” too.
Aren’t they?
Unless Jarrow mean the cask beer is “Real”, but they wouldn’t miss-sell their bottles would they?
Rivet Catcher is a Golden Ale with the obligatory straw and honey aroma.
The malt is shortbread biscuits, brown sugar, honey and white pepper, and the hops are sharp with nettle tea and lemon rind, leaving a finish that’s long, crisp and dry.
All in all a decent beer.
But “Real Ale”?