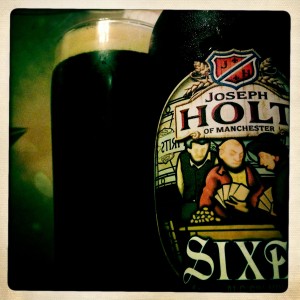 I don’t know whether I like this or not.
Joseph Holt’s Sixex is a strong dark beer that smells of raisins and rum.
The malting is a Garibaldi, crunchy pale biscuit and a bunch of raisins, a boozy fruit compote and a mug full of toffee.
But that’s about it.
The hops are almost completely absent, save for a thin veil of leafy greenery.
As a result there’s nothing to cut across the stickiness, nothing to temper the runaway treacle of the malts.
The result is a beer that won’t go away, but not because it has a nice long finish that you want to go on, instead it’s like that acquaintance who just doesn’t get the hints about outstaying his welcome.
I’ve made up my mind, I don’t like it.