I am awake.
I have my first hangover for months.
I only had four pints.
What a lightweight. 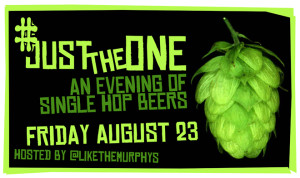 A few weeks ago I got an email from Connor Murphy (@likethemurphys) who suggested running a Twitter event around single hopped beer.
And so it was that he, I and several others all started drinking beer and talking about it in the ether.
I do like these events because whether or not you get a hundred people or a dozen people taking part, you can create a chattery pub atmosphere without leaving your sofa.

I started the evening early (it had been a long day and I need a drink) with Art Brew’s Hip Hop Experiment 366 (4.3%), while I helped get the kids to bed and watched as Twitter went from the odd mention of #JustTheOne to a steady hum as people got home, ate, and opened bottles.
What interested me most during the evening was that, although ostensibly there to talk about how the individual hops tasted, worked, whatever, the conversation was more general and included several people getting to know each other.
As I say, much like in a pub.
I’d decided to try a couple of the range of beer from Marks & Spencer as I’d been impressed that they’d decided to sell single hopped beer as part of their core range. 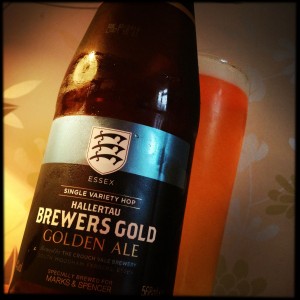 I chose two and the first I opened was Hallertau Brewer’s Gold (4%).
Brewed for M&S by Crouch Vale, a brewery I like with a brewer that I know a little, and found it to be far more interesting than I’d really expected.
The aroma’s not much to write home about, but there’s a decent malt that’s predominantly honey and wafer biscuits.
The hopping is nettle tea and bramble jelly, dandelion leaves and spicy grass clippings.
It’s sharp, clean and very refreshing only really lacking for me by the fact that I’d perhaps have liked a slightly higher ABV to really accent the flavours.
But then I appreciate where this beer is selling, and for a high street brew this is really rather good. 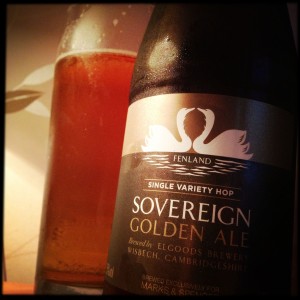 After eating, and while switching between Twitter accounts so as to gush about Bhundu Boys, Babaa Maal and Nusrat Fateh Ali Khan being on TV, I opened my second M&S selection.
Sovereign Golden Ale (5%) is brewed by Elgoods, a brewer that I’m not a great fan of.
I was really rather surprised by this one.
There’s a lovely vanilla pod richness that hangs around throughout the beer, and over it the hops are herbal with thyme and basil, astringent with lemon juice, and green mown lawns and flowerbeds.
There’s a nice sweet honey too, but for me it’s the vanilla thing that makes this beer so enjoyable which I’d put down to the malts rather than anything that the hops are doing.

And this is where my hangover was launched.
I usually set myself an absolute limit of three pints in an evening, and usually drink no more than two and a half, but as I was watching both the TV and two Twitter feeds, I convinced myself that a bottle of Oakham’s Citra (4.6%) would be a good idea.
And at the time it was a good idea.
A very good idea.
Citra is a hop that I used to loathe by itself.
Nowadays I like it quite a lot.
It’s still far from my favourite, but when used right – as it is in Oakham’s beer – it’s an absolute joy to drink.
And I drank it rather quickly before forgetting to say goodnight to Twitter and flopping into bed.
As a result I’ve no idea how much longer the evening went on for or how it all ended.
I presume it ended in a bunch of slurred tweets before everyone else collapsed too.
So, thanks Connor for dreaming up the idea and running with it, and thanks to everyone that got involved.
I’m looking forward to the next one.

2 Responses to #JustTheOne: An Evening Of Single Hopped Beer