Make Mine A Keg: Trade Day At The Great British Beer Festival 2013 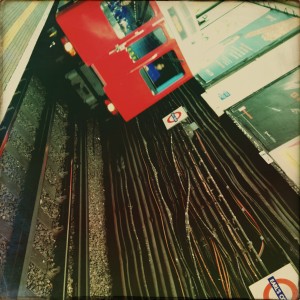 This is the train that takes us to BEER.

How very genteel Trade Day is.
No elbowing my way through bustling, hustling crowds fighting to get served, instead my day was spent with a couple of old mates bumping into friends as we wandered slowly around Olympia grabbing beers (and the odd pie) as we went.

My day started with an hour on the train into London and a race down the Piccadilly Line to Earl’s Court where I was met by a station full of expectant beer drinkers waiting for the Olympia connection.
It was a lovely morning, sunny and crisp, and there was a buzz of expectancy in the air as we all lined up around the block waiting for the doors to open.

I was joined by my old friend Anthony (@scissorkicks) and after familiarising ourselves with the layout of the venue we grabbed our first drinks of the day.
I started with a rather good Arbor Ales Triple Hop Series #10 (4%), which was a nice light and easy start to the proceedings.
We wandered over to the American Craft Stand and discovered that that was where all the beer geeks were situated and, slightly sadly, I think we felt right at home. 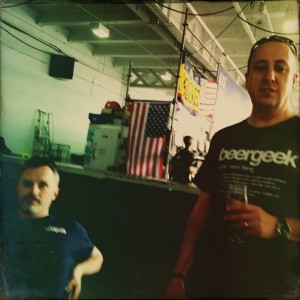 Jake and Justin being effortlessly cool.

I grabbed a Flashback India Brown Ale (6.88%) by The Boulder Brewing Co. which was a good resinous, if a little malt heavy, beer.
I also snuck a sip of Anthony’s very good Everyday Junglist by DC Brau Brewing Co. (5.5%).
Anthony had to change out of his cycling gear and while I waited who should wander up but Jake and Steph from Salopian Brewery (@salopianbrewery). It was great to see some friendly faces and to catch up on news and gossip.
Shortly after we were joined by John and Becky from Art Brew and Justin (@1970sboy) and his wife.
Introductions were made all round and I felt part of a big happy gang as I drank a glass of Brewers Union Local 180’s 180 XXXB (6.1%) which I chose purely because of the similarity between their name and Thinking Fellers Union Local 282, who are a band I like rather a lot.
All I can say is, I prefer the band. 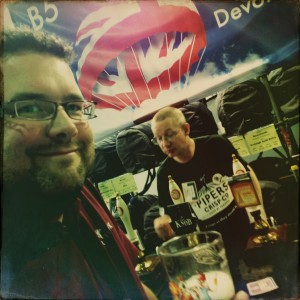 Chris Beer Hawk and a man pointing to a Knob.

We decided to have a wander through the venue and bumped into the entire Grain Brewing (@grainbrewing) gang.
More hellos and more catching up, introductions and chatter until we found ourselves at the English Bottled Beer Bar that was being run by The Beer Hawk (@thebeerhawk).
I had to stop and talk as it was these lovely chaps who had given myself and Anthony the complimentary tickets that allowed us in.
They’d got a lot of people waiting to talk to them – including Chris (@cshallwriter), hello! – so we didn’t hang around too long, and instead headed off for food.
On our way who should I bump into but the Landlord of my favourite pub, The Cock Hotel in Wellington, Shropshire.
It’s a small world, the world of beer.
With our pies I opted for what was to be the beer of the day for me, and the only one that I went back to for another glass.

It was over on the German and Czech bar and it was Opat’s Mandarin Orange (4.7%).
Served from keg – yes, you read that correctly, and there was plenty of talk during the day from all corners of the event wondering out loud why there was still no sign of English kegged beers when the overseas ones were so good – Mandarin Orange is a lagered beer that’s brewed with whole mandarin oranges.
To say it was like pushing your face into a warehouse full of fruit is not doing the beer justice and both I and Anthony spent some time pondering just how beautifully fresh and rich with zest this beer was. 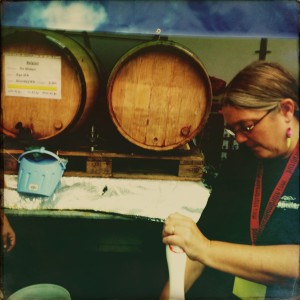 What a beautiful pair of casks.

We were eventually joined by Nik (@nikingtonspa) who had been working across town at Partizan Brewing all morning and had come over with The Kernel gang.
As we wandered I grabbed a quick glass of Art Brew’s Monkey IPA (6.2%) just because I could and we headed over to the Belgian, Dutch & Italian bar to hang out and drink beer.
I started there with Birra Toccalmatto’s Grooving Hop (4.5%) which was a super spritzy Blonde and then moved on to Taras Boulba (4.5%) by Brasserie De La Senne which was a slightly dissappointing Belgian IPA.
After being introduced to Evin from The Kernel (I was a bit starstruck if I’m honest, and couldn’t get my words out), I spotted Glynn (@GlynnDavis) and repeated the apology I’d made publicly some months ago.
We had a natter and he took my number so that I could buy him a beer later on when he’d found one he fancied. 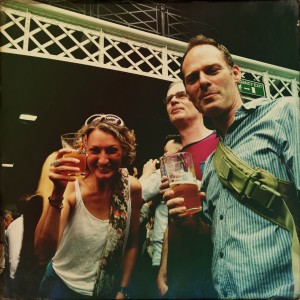 Nik, Anthony and I shared a couple of rather superb bottles of Italian beer that I forgot to make a note of (one was a rather special sour smoked coffee stout) and then we headed back across the venue, stopping at the Harvey’s stand where I had my most unremarkable beer of the day, Harvey’s Wild Hop (3.7%) was lacking in body and rather boring in relation to the others I’d drunk so far.
We caught back up with the Grain Brewery mob again and I bought Glynn his beer (he had the Mandarin Orange, fact fans), bumped into The Beer Hawk chaps again and then got sucked back towards the American bar where I had my second favourite beer of the day.
Rogue Ales’ Mole Stout (6.2%) was a deliciously dark chocolate stout with a good chilli kick in the finish.
While drinking it I finally met up with Dave and Anne from Hardknott Brewery (@hardknottdave) who were more than happy to talk beer with us for twenty minutes. 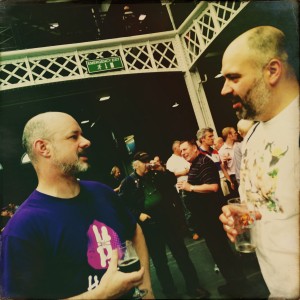 Dave and Anthony do their best impressions of each other.

I like Dave very much indeed, he was one of the very first beer bloggers I read and has always been very supportive of what I’m trying to do with CAMRGB.
Just as he wandered off I was informed by Justin, who had suddenly appeared back at the bar that I had missed Melissa Cole (@MelissaCole) by a matter of moments.
We rushed off to find her but like a Will O’the Wisp she was gone.
Sadly I realised I was going to have to catch my train very soon and so I snatched one last beer.
Afterwards I wish I’d stopped at the Rogue.
Sierra Nevada’s Olivia Saison (7.2%) was very nice indeed, packed with yeasty fruity goodness, but it wasn’t a patch on the Mole Stout and as such faded a little into insignificance.
And so it was five thirty, I’d met up with lots of great people – including Seimon Williams, near namesake and wearer of splendid CAMRGB T-Shirt – but it was time to go.
I called my partner to tell her I was on my way home and she asked me knowingly why I was slurring a little bit.
An hour on the train seemed a lot longer as I was getting tired and grumpy.
I just wanted to be home and asleep.
Fortunately I was picked up at the station by my good friend and top chap Richard (@fifthman) and dropped off at my door a little the worse for wear but very happy indeed. 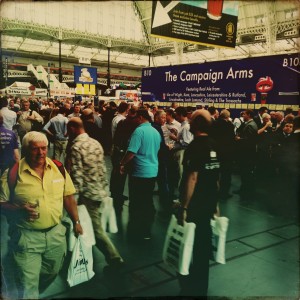 So that was my CAMRA Great British Beer Festival 2013 Trade Day.
I wasn’t taken out by Real Ale ninjas, my favourite beer came in a keg and lots of people seemed to agree, the casks are kept beautifully but there was quite a gap in representing what the UK has to offer in terms of great beer.
I suppose that’s where Independent Manchester Beer Convention and Birmingham Cubed come in.

Thanks to everyone I spent the day with, including the people I’ve forgotten to mention – Dave from Birmingham Cubed (@birminghamcubed) being one, and Matt (@totalcurtis) in his CAMRGB shirt who arrived as I left being another – and a very special thanks to The Beer Hawk team for getting us in there and showing us such hospitality.
I had a blast.

4 Responses to Make Mine A Keg: Trade Day At The Great British Beer Festival 2013