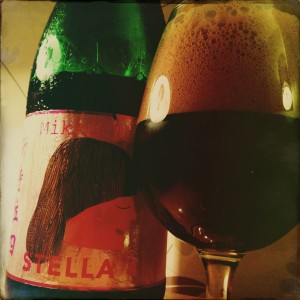 Stella 4 is an Imperial Milk Stout aged in Grand Marnier Barrels and it’s by far the worst Mikkeller beer I’ve tried.
It starts out OK, pouring a nice thick creamy black with a fat and fluffy head and a smell that’s creamy coffee and boozy chocolate.
But on taking a sip the beer was so sugary, so sweet, that it very nearly killed off any other flavours that might have been lurking around.
Just the merest hint of anything dark and woody, the slightest apology for toffee or chocolate from the malts.
The hops gave a reasonable account of themselves with a lightly herbal, crisp bitterness, but the overall effect was that I struggled to drink this as it became cloying and sickly.
As for the Grand Marnier barrel ageing, I couldn’t spot it having any effect on the beer at all.
I had a friend visiting and had opened it especially.
Between us we fought our way through it, because at over £30 a bottle, it was too expensive to pour down the sink.
Not a very pleasant experience.