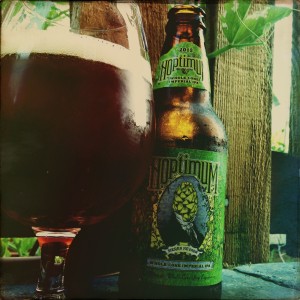 Just in case you didn’t know, Hoptimum is Sierra Nevada’s Whole Cone Imperial IPA.
What’s more it’s an absolute madman.
100 IBUs, massively hopped, dry hopped and torpedoed, this makes my favourite everyday tipple, Sierra’s Torpedo, feel like the skinny wimp that it is.
This isn’t a beer that smells, it’s a beer whose stench seeps into your pores and nestles there.
It’s loud, stingingly rich, pungent with resin coated meadow flower perfume.
Somewhere in the distance there’s Sierra’s gloopy toffee coated shortbread malt but it’s the fat lad in the race and simply can’t keep up with the rest of the field.
Instead it gropes for a fizzy cola Panda Pop and sends a sick note signed by its dad excusing it from taking part.
And I don’t blame it.
Because the hops are in control here.
They’re sinewy running thunder balls with the fastest legs.
They’re sharp and they’re cool and they’re absolutely mental.
Massive pine resin, peanuts, mangos, peaches and lime pith.
But they don’t end there as they douse you in alcohol drenched orange marmalade and set you alight before dancing around your burning face flicking lemon pips into your eyes while your jaw caves in.
Hoptimum is enormous.
Hoptimum is wild.
Hoptimum is absolutely brilliant.